After a forgettable goalless first half at the Olympiastadion, which was once again without fans in attendance as Germany's top flight began its second weekend back after the enforced coronavirus hiatus, captain Ibisevic emphatically headed home Marvin Plattenhardt's left-wing cross in the 51st minute.

Hertha came under fire for its close-proximity celebrations in last week's 3-0 win at Hoffenheim and Ibisevic told his team-mates to mark his goal with socially-distant congratulations, although he did plant a playful headbutt on the chest of Dedryck Boyota, who denied he kissed Marko Grujic on the cheek in the Hoffenheim win.

Just 69 seconds after his goal, Ibisevic played in Lukebakio and he coolly rounded the on-rushing Rafal Gikiewicz before sliding into the empty goal.

A fine outing for Ibisevic continued when he teed up Matheus Cunha, scorer for a fourth Bundesliga game in succession, to side-foot brilliantly into the bottom-right corner from the edge of the box.

The win sees Hertha move to 10th on the table, while Union is now two places and four points back. 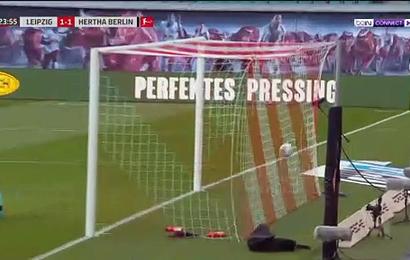