It has been some campaign for one of European football's most feared marksmen and he became the first player to score in 11 consecutive Bundesliga matches earlier this term.

Lewandowski has scored against each of the teams currently playing in Germany's top flight, having netted against Fortuna Dusseldorf for the first time on Matchday 29.

Having chalked up 33 league goals this term, Lewandowski is a shoo-in to be the Bundesliga's top scorer for the fourth time in five seasons.

Borussia Dortmund winger Jadon Sancho was second, with Kai Havertz of Bayer Leverkusen third for an award decided by fan votes and experts.

Timo Werner, Amine Harit, Erling Haaland and Serge Gnabry were also in the running for the prize, for which Lewandowski received a whopping 50 per cent of the vote.

Bayern wrapped up an eighth straight league title this month and can still win a Bundesliga, DFB-Pokal and UEFA Champions League treble.

Next BVB has had no inquiries for Sancho: Kehl
Read 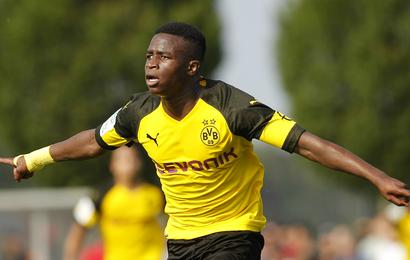