The 22 year-old Norwegian has rocketed from outside the top 50 to 16th currently in the world rankings in just 18 months, and he is the top seed this week in Sweden.

Such a status is all rather novel for Ruud, but he breezed to a 6-0 6-2 win over 18 year-old Danish wildcard Holger Vitus Nodskov Rune.

That carried him through to a quarter-final meeting with Swiss player Henri Laaksonen.

Ruud is back on clay this week, having enjoyed great success on the surface already this season, reaching semi-finals of the Masters 1000 events in Madrid and Monte Carlo, while also winning a title in Geneva.

A first-round exit on the Wimbledon grass followed those positive results, so another event on clay comes as a boost.

"It is a surface I have had the most success of my career, it is great to be back here in Bastad," Ruud said after crushing Rune's hopes.

"There is a bit of extra pressure [being the top seed]. In a match like this against a fellow Scandinavian younger player, it is even more."

He added, quoted by the ATP website: "I think I was very professional in my mindset today. I played a match without any errors really from the first to the last point.

"It is a nice feeling being the top seed but also pressure. I felt great crowd support, it is nice to feel that energy."

Qualifier Laaksonen beat Elias Ymer 6-2 7-5, while third seed Fabio Fognini was bounced out of the tournament, losing 6-3 1-6 6-4 to Spain's world number 97 Roberto Carballes Baena, who will tackle Slovakian Gombos in the last-eight stage on Friday.

At the Hamburg European Open, Pablo Carreno Busta justified his standing as second seed with a 7-5 6-3 win over fellow Spaniard Carlos Taberner to reach the quarter-finals.

Stefanos Tsitsipas is the top seed this week at the tournament in Germany and won through to the last eight on Wednesday.

Others to move through the rounds in Hamburg included Dusan Lajovic and Federico Delbonis, the latter advancing with a handy 6-3 7-6 (7-4) win over fourth seed Albert Ramos-Vinolas.

Next Tsitsipas's racket breaks on route to Hamburg exit
Read 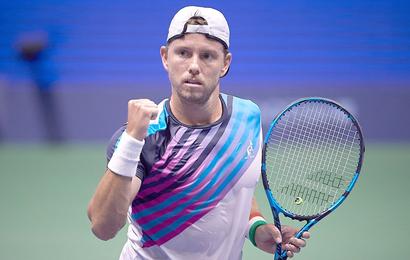