Andres Iniesta, the diminutive, mercurial midfielder who Pep Guardiola once told Xavi would 'retire us all', has himself called time on a decorated international career that has yielded two UEFA EUROs titles and the greatest prize of them all: the World Cup, in 2010.

As was the case with Iniesta's club career at Barcelona, the 34 year-old was a central figure in his national team's rapid rise to the top of world football. Barcelona's and indeed Spain's trajectory throughout the scintillating years from 2007-2012 matches Iniesta's own career progression, as the player who famously cried for home when he arrived at La Masia as an eight-year-old, emerged into footballing elite.

Here are five of his most iconic moments for both club and country - touchstones that barely do justice to this effortless play-maker with an uncanny knack for scoring important goals.

5 The winner against Chelsea

In one of the more controversial UEFA Champions league matches in recent memory Barcelona - down 1-0 and staring at elimination from the tournament - had failed to register a single shot on target against Chelsea in the second leg of their 2008 semi-final when Lionel Messi got the ball in the 93rd-minute. He found Andres Iniesta, who thundered his right-footed shot past the outstretched arms of Petr Cech and into the Chelsea goal. Barcelona went through on away goals to the final against Manchester Unite, where it breezed past Sir Alex Ferguson on its way to a treble.

4 Standing ovation at the Bernabeu

Just what does it take for a visiting player dressed in a Barcelona shirt to get a standing ovation at the Bernabeu? In 2015, wearing the captain’s armband for the first time against Real Madrid, Iniesta provided a virtuoso performance that saw him acknowledged in the same way as Ronaldinho nine years earlier. Iniesta’s ability to work his way out of pressure situations, slice open the defence with visionary pass and create space for himself by beating his opponent, had Barca in total control.

He befuddled Luka Modric with a back-heeled first time pass, played Neymar in for his goal, won the ball back relentlessly, and capped a big night out with a thunderous finish after Neymar returned the favour. Barca ran out  4-0 winner and Iniesta brought the locals to their feet - an act previously only reserved for Ronaldinho and Maradona.

Barcelona’s 5-0 destruction of Real Madrid in 2010 was the defining performance of an era in which Pep Guardiola’s team established itself as one of the greatest club sides football has seen. Intricate passing, rapid transitions and ruthlessness in front of goal, aided by sheer weight of possession, were hallmarks of this team, fueled by its creative core of Xavi, Iniesta, Busquets and Messi. When Jose Mourinho’s Madrid visited the Camp nou in November of that year, it had enjoyed the best start to a LaLiga season, undefeated and top of the table. What happened next flipped the league race on its head left Mourinho with the then worst loss in his career.

Wrote Sid lowe of the win: Busquets and Iniesta moved the ball with a pace and precision, usually with a single touch.

2 Scoring the winner against England

Just past the hour mark of England’s 2007 Friendly against Spain at Wembley, second half substitute Andres Iniesta swung his right boot at a mistimed clearance, sending it curling into the top right corner of the England goal. The 1-0 win would be Spain’s first over England, in England, in 26 years. It would also be the catalyst for three major international trophies over eight decorated years – including the World Cup in 2010 and back-to-back European Championships in 2008 and 2012. Many Spanish players believe that the win at Wembley gave them the belief to go on and perform on the biggest stages.

Indeed Spain had a reputation for underwhelming when it mattered most. Wrote the BBC at the time: “Spain face a real struggle to qualify for Euro 2007”. Iniesta’s classy goal ushered in the first winds of change. 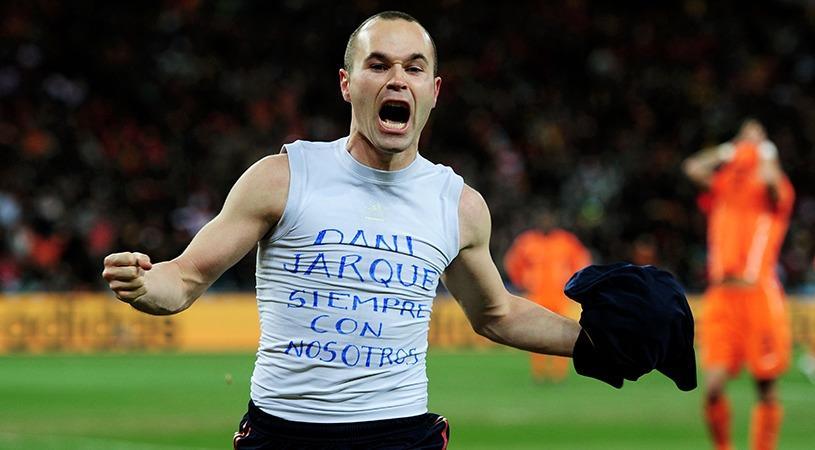 The 2010 final was a classic clash of styles: Spain’s tiki-taka fuelled by the core midfield powering Pep Guardiola’s Barcelona, versus Netherlands’ stoic resistance. Fittingly, the man who fired Spain to that hoodoo-breaking friendly win over England three years earlier, would be the one to seal the nation’s drought-breaking World Cup win, Iniesta wrapping his right boot around the ball and rifling past Maarten Stekelenberg to seal arguably the most important win in his nation’s football history.

Zlatan to make good on bet with Beckham