“This young, hungry, bunch of players…”

One aspect of my job is to craft the “Opener” to our live studio coverage at beIN SPORTS. It is something many of you who follow (and now miss) sports broadcast would be familiar with, akin to a trailer to a blockbuster film, designed to tease what is about to come. Openers are often filled with goals and action, emotive faces and desperate gestures, flags and fans and fanaticism at its very best.

I remember cutting the Opener to the Europa League final in 2017 (the final instalment of Jose Mourinho’s “Treble” for Manchester United) and finding the above line of commentary during the first leg of the Semi-final, where Ajax welcomed Lyon to Amsterdam, and thoroughly dismantled a strong visiting side to all but secure their place in the final in Stockholm.

This young, hungry, bunch of players did lose to a canny Jose Mourinho side focusing on exploiting a perceived vulnerability in a certain Davinson Sanchez, but it was perhaps the first chapter in a remarkable 30-month period that culminated in heartbreak at the Johan Cruyff Arena against Tottenham in the 2019 Champions League Semifinal.

Having finished second in the Eredivisie behind PSV Eindhoven (after losing title decider in April), Ajax started in the second qualifying round, dispatching Austrian side Strum Graz with relative ease, before needing a 3-0 home win in the second leg against Standard Liege to advance from the third qualifying round, and finally doing away with 1999 Semi-Finalists Dynamo Kyiv.

A challenging group stage draw followed and watching the broadcast of the draw, I remember  thinking to myself, “Ajax would do well to finish behind Bayern, but will probably not beat Benfica.” The ties against AEK Athens seemed to be formalities, even if the Dutch side were not the force they once were.

It didn’t take long for Ajax to spring a surprise, drawing away at Bayern in Matchday 2 thanks to an equalizer from Moroccan full-back Noussair Mazraoui. They then beat Benfica with a dramatic injury-time goal, again from Mazraoui, and by then people were beginning to sit up and take notice. By taking points off of Bayern and beating Benfica, they had their destiny in their hands. Dusan Tadic then scored three in the final two games, and with that, they were through.

Growing up, I had always been a fan of Dutch football, enjoying the skill and poise of players like Dennis Bergkamp and Ruud van Nistelrooy, Marco van Basten and Arjen Robben, Edwin van der Sar and Jaap Stam.

Now working at beIN SPORTS, interacting with Nigel de Jong and Ruud Gullit on a regular basis reignited this fandom, these iconic players’ reactions to the progress of the young and exciting Ajax side sometimes as thrilling as the football on display.

The typical belief, though, was that Dutch teams tended to implode at some point, and in my time watching football that seemed true. Bergkamp’s sumptuous goal against Argentina, Van Persie’s header against Spain, Total Football’s failure against Germany. It appeared as if Ajax were entertaining but doomed to fall against the first real hurdle they faced.

And they drew Real Madrid.

The first leg ended 2-1 to the defending Champions, and even without Cristiano Ronaldo it was beginning to look like the end for the Dutch side. Many members of the crew who work in our studios are ardent supporters of Barcelona, which can sometimes translate to being an “anti-Madridista” but even they had accepted that it would take a Juventus or Man City or Barcelona to knock them out. It would take a Ronaldo, a Guardiola, a Messi.

But Ajax had Frenkie de Jong, they had Matthijs de Ligt, and perhaps most importantly in the second leg, they had former Southampton forward Dusan Tadic.

It was bordering in hilarity, working on the game in our studios. One thing viewers may not realize is that we are fans too, and it is exceedingly difficult to efficiently work on analysis and highlights when you have your head in your hands, watching Ajax dismantle Real Madrid with such ruthless flair.

The poise and passing from de Jong that evening demonstrated why exactly Barcelona had paid all that money for him. Those Barcelona fans beside me shrieked in glee, instantly anointing him the next Iniesta and Xavi. 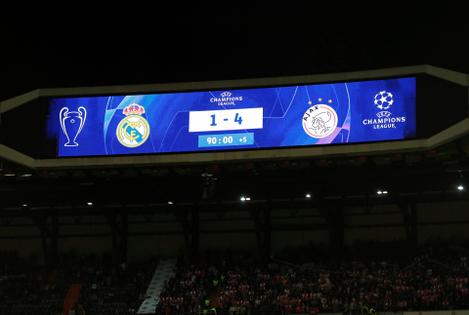 Down went Real Madrid, and then came Juventus. The Old Lady of Italian football who had broken the bank to sign Ronaldo, Mr Champions League. Ronaldo, who had single-handedly defeated Atletico Madrid in the previous round, his second-leg hattrick (and pointed celebrations) wrecking Diego Simeone’s well-oiled Atletico machine.

I  had been watching and working on that game as well, and the way Ronaldo imposed his will on the game, more than anything, suggested that this was finally their year.

After Ajax dumped out Real Madrid in the round of sixteen, surely there could not be any more drama. Surely this is where things calmed down, with the games starting to be described as “cagey” and like “chess matches” and ties decided on a mistake or a miracle or a moment.

The moment belonged to De Ligt.

When you watch football coverage, it can sometimes be challenging to properly demonstrate how good a central defender is. Matthijs De Ligt usually breaks that trend, being a defender who is both good on the ball and strong in the tackle. His last season at Ajax (and for the Dutch national team, playing beside Virgil Van Dijk) was a constant highlight reel of heroic challenges, accurate passes, and in this case, important goals. 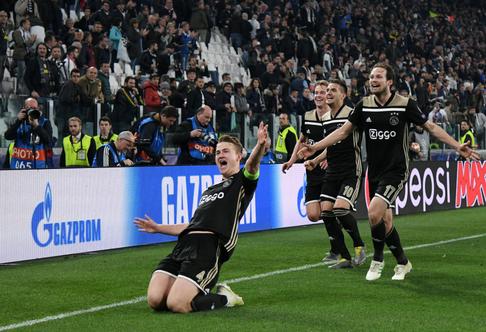 This proved to be the pinnacle for this young, hungry bunch of players, however. After slaying Real Madrid and Juventus (as well as going unbeaten against Bayern Munich), the internet had been full of memes about how Ajax were grim reapers, ready to take down the traditional superclubs of Europe.

Tottenham Hotspur came next, and we all remember how that ended, with tears of joy from Mauricio Pochettino, and tears of despair from the Ajax squad. The lingering shot of Frenkie de Jong staring forlornly into the night as the Spurs players whooped in ecstasy all around him is haunting in its lost promise, that of what might have been. 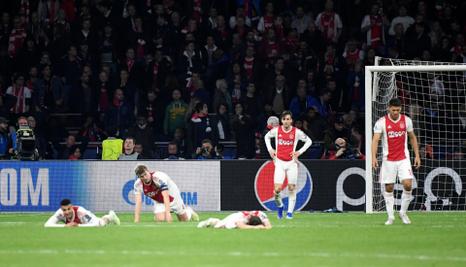 So the class of 2019 would not repeat the feat of 1995, where an 18-year old Patrick Kluivert came on to win the Champions League for the Dutch side. Daley Blind would not win the trophy his father Daley did. Edwin Van Der Sar, Ronald De Boer, and Marc Overmars would not see their proteges repeat what they did as players themselves.

Like that class of 1995, though, the 2019 side would soon be pulled apart. De Jong and De Ligt moved to Barcelona and Real Madrid, and while of a lower profile than the duo, Lasse Schonne, Kasper Dolberg, and later Hakim Ziyech would also leave, echoing how almost all of the players that won the trophy for Ajax in 1995 were scattered within a couple of seasons.

It may be cruel to call it a downward spiral for Ajax, or to say that that would be the best they would do for the foreseeable future. They did not make it out of the group stage in the season that followed, dropping to the Europa League only to be eliminated by Getafe, a far cry from blazing through Real Madrid.

Football is filled with stories, each person in its own way as the goals and action, emotive faces and desperate gestures, flags and fans and fanaticism speak to you on a primal level. We may never know if Ajax will pull themselves back up to regain former glories, but what we do know is that for a brief, miraculous, electrifying period, the story of this young, hungry bunch of players was the story we all wanted to be a part of.

Next Cristiano Ronaldo at Madrid - The Quest for Greatn
Read