The Springboks made 11 changes to the starting line-up from last week's 32-12 win and it heralded a more one-sided contest at Nelson Mandela Bay Stadium.

A first half dictated by the boot of Handre Pollard and too many cheap Pumas penalties allowed South Africa a more carefree second 40 minutes, with Makazole Mapimpi and Malcolm Marx scoring their two tries in a straightforward victory.

Pollard's penalty opened the scoring after some good early Pumas possession, before Trevor Nyakane was forced off with injury inside a quarter of an hour.

Argentina gave up eight penalties inside 25 minutes, with Pollard stretching the lead to 9-0 before Domingo Miotti kicked his side onto the scoresheet.

Pollard made it four from four as the Springboks continued to draw ill-discipline from their opponents. Referee Karl Dickson had soon had enough, sending Rodrigo Buni to the sin bin for offside, with Pollard again making no mistake with his fifth penalty before half-time.

Miotti missed his mark either side of the interval before South Africa got the first try of the contest, Mapimpi racing in down the left after a good Willie Le Roux pass at the end of a quick move.

The power of the Springbok pack was simply too much and Marx went over after another maul, Pollard adding the extras to keep up his spotless record.

With South Africa chasing a bonus point and Argentina desperate to reduce the deficit, the contest went beyond 84 minutes before Pablo Matera battled his way over the line and Nicolas Sanchez converted.

Lood De Jager marked his half-century for the Boks with another imperious performance as the pack once again proved too strong.

The Sale Sharks lock made seven carries and won all 14 of his tackles, having not missed any of his 16 attempts a week ago.

Argentina simply made life too easy for South Africa through their own lack of discipline, giving up 21 penalties to the Boks' 11.

It proved the undoing of a decent defensive effort that saw Tomas Lavanini and Julian Montoya reach double figures for tackles. 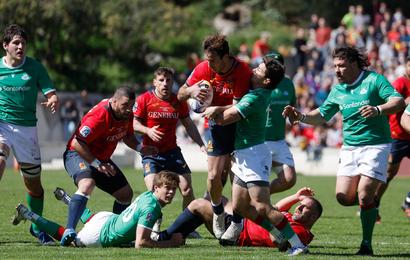