In the latest instalment of our team of the season candidates, we shine a light on the Premier League attackers who have grabbed the headlines in 2019-20.

As sure as night is day, Sergio Aguero continues to score goals at a prolific rate.

In a season that has seen him become the Premier League’s all-time hat-trick king after his treble at Aston Villa in January with 12, the Argentinian has once again been the man who Manchester City can always rely on. Aguero’s 16 goals from 22 games see him handily placed in the race for the golden boot, and only three goals behind leader Jamie Vardy as the campaign prepares to resume action.

Despite his goal-scoring heroics ever since he arrived at the Etihad Stadium in 2011, Aguero has criminally only featured in the PFA Premier League Team of the Season just twice and they have both come in the last two years (17-18 & 18-19). But that shouldn’t detract from a player who is now the Citizens’ all-time top scorer and will surely be regarded as one of the greatest strikers this league has ever seen.

With a goal every 87.5 minutes and shot conversion of 30.7% in 2019-20, City’s No.10 has consistently produced even in the face of a laboured title defence by Pep Guardiola’s men and for that surely deserves his place in our best XI.

In what has been a turbulent season at the Emirates Stadium, Pierre-Emerick Aubameyang has offered hope when it has appeared in short supply.

Whether deployed on the left wing or through the middle, Aubameyang has consistently found the back of the net and with 17 goals this campaign only Jamie Vardy (19) has scored more. The prospect of a second consecutive golden boot (albeit shared in 2018-19) still looks very high were he to maintain his great form. 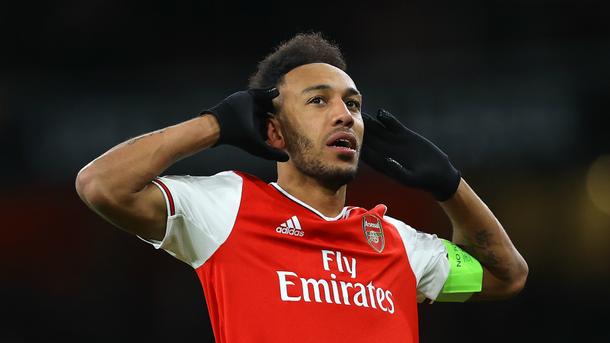 The Gunners’ captain got off to the best possible start with seven goals in his first seven games, and it’s fair to say without his talismanic efforts Mikel Arteta’s side would be even further away from European qualification than they find themselves right now. Should they seal a top-six finish, much will be owed to the heroics of their Gabonese star.

Whether it’s a long-range effort or a cunning run-from-behind move that catches defences unaware, Aubameyang is a handful for any defence and his back catalogue of goals includes an array of efforts that would make any goal of the season compilations.