"I sat in the back of the car and felt the tears rolling down my face. I hadn't cried for years but, on the way home, I couldn't stop. The tears kept coming. I can't even tell you if the streets were thick with traffic or as empty as I was on the inside. It was killing me."

Steven Gerrard is the last man; no problem there. The Premier League title had always eluded Liverpool, but 2014 was their year. Merseyside was expectant. Brendan Rodgers was masterminding their most significant achievement since the days of Kenny Dalglish, Luis Suarez was in form, and Gerrard was leading by example. Liverpool had one hand on the trophy.

Suarez, Gerrard and Daniel Sturridge led Liverpool's title charge. Sixty-five goals and 32 assists between them that season. The team were winning matches when they were not at their best. Liverpool's attacking force had done everything.

However, just one chilling moment for the reds would change all that and start a chain of catastrophic events which would ultimately end their quest for a maiden Premier League crown.

Cue the biggest game of the season thus far. Liverpool was cruising, and victory against Chelsea would see them only requiring a point in their penultimate game which was away at Crystal Palace. Even then Manchester City had to win all their games. Anfield fully prepared for another blockbuster afternoon, but Blues boss Jose Mourinho had not read the script. Nor had Demba Ba. 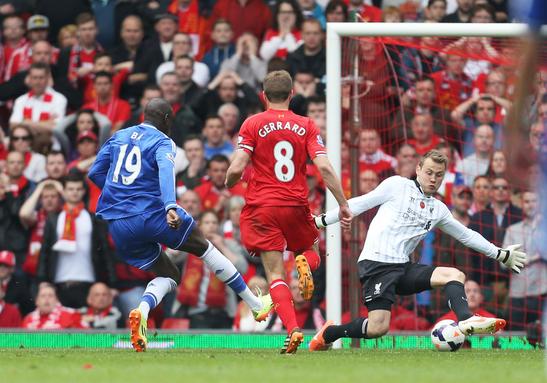 The Chelsea man was starved of service all afternoon. The ball rolled to Gerrard with the world at his feet; it was a routine pass to a world-class player. There was nothing to suspect that the next ten seconds would ultimately begin to start a sequence of events. As Gerrard misplaced the pass, there was a jolt. A gasp. Ba had sensed prey and strode forward.

Gerrard was losing the battle; he stumbled forward with the weight of expectation, anxiety and nerves on his shoulders. The slippery Anfield turf was playing its part in proceedings. Gerrard stumbled, fell and looked up. Ba snatched the ball with the goal at his mercy.

Mamdou Sakho and Martin Skrtel scurried back. They were never the best on the ball but ran back with shock and bewilderment etched on their faces. Gerrard had regained his footing and was now sprinting back already thinking of the headlines. Ba approached the area; it was a moment too good to be true. In all in drama, he scuffed it through Simon Mignolet's legs and into the back of the net. A sucker punch to the heart of Gerrard and Liverpool.

Chelsea went on to win 2-0 that day – Willian added a second in the fourth minute of second-half stoppage-time. Mourinho had done it again. His celebration at the end when he ran down the touchline with his hand beating his chest showed the world that he had won the mind games. He planned to spoil Liverpool's day – as revealed by Chelsea's left-back Ashley Cole when he spoke to Gerrard some years later. It worked a treat. Chelsea would go on to win the title.

Many Liverpool fans say their draw to Palace was the reason for their capitulation. Many though, afraid to attribute blame on a Liverpool legend such as Gerrard. This season could change all that. But for Gerrard personally, it was a case of, so near, yet so far. He would never go on to win the Premier League as a player. He has his slip to thank for that.