Predicting the next best thing in football is always a hazardous game.

For every sure-fire hit, there are those who are likened to the game’s all-time greats but fail into complete obscurity. So, with that in mind, what of those who have been given the unenvious tag of ‘the next Pele?’

We’ve already covered in great length Adu’s overhype on the Football Manager game series elsewhere. We couldn’t help but further lament the rise and fall of a once gifted prospect.

Aged 14, Adu became the youngest-ever full-time athlete in America when he was drafted to D.C. United. After a debut campaign in 2004 which included dual records of the Major League Soccer’s youngest-ever player and scorer respectively, it was a case of too much too soon as the teen demanded more playing time and even appeared in a Pepsi advert with none other than Pele himself!

In 2007, Adu eventually got his wish of moving to Europe as he joined Benfica. Unfortunately, the American failed to impress and a succession of loan spells followed across the continent. Injuries also played a big factor in the forward failing to reach the potential that was placed on his shoulders.

Ever since Adu’s career has evolved into that of a journeyman, and what was once so promising a case of ‘what if?’ lingers.

At the age of 15, Robinho was picked by Pele himself as his heir apparent but questions about his application and commitment have always surrounded the diminutive Brazilian.

After all, the two shared the common bond of playing for Santos, and in 2002 Robinho helped lead the club to their first Campeonato Brasileiro title since the three-time World Cup winner himself represented the Alvinegro.

A further title was won in 2004 before Real Madrid secured his services in 2005, and handed him the prestigious No.10 shirt vacated by Los Merengues great Luis Figo.

Although further success followed with two La Liga titles, the football world was stunned, and Robinho himself, when Manchester City signed him in 2008 as a testament to the club’s new-found wealth.

His stay in Manchester would last less than two years and after a return to Santos on loan, Robinho headed to AC Milan in 2010 and won another league title with the Rossonieri in 2011. However, injury disrupted his time at San Siro and further diminished the playmaker’s ability to impose his mark on games.

Since then the Brazilian’s career has been a nomadic one, although another league title was won with Guangzhou Evergrande in 2015. Robinho had another spell in his homeland, this time with Atletico Mineiro in 2017 before ending up in Turkey with Istanbul Basaksehir via Sivasspor.

Now aged 36, Robinho and his current employers have reached this season’s Europa League round of 16 and are 1-0 up in their tie against Copenhagen. 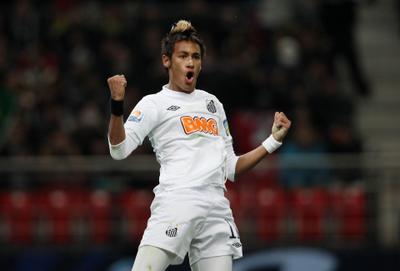 Compared to Robinho, it’s fair to say Neymar’s career to date has been more fulfilling than his fellow ex-Santos alumni.

For starters, the world’s most expensive player has won more major club honours (19 in total), claimed Olympic gold with his country at the 2016 games - in Rio of all places - and has regularly featured in the conversation for the Ballon D’Or and World Player of the Year awards.

What is missing though is international honours and in particular a World Cup winners medal. Neymar’s back injury didn’t help the Selecao before they were humiliated in a 7-1 defeat to Germany in the 2014 semi-finals. Further disappointment followed four years later as Belgium eliminated Brazil in the last eight and he missed out on last year’s Copa America triumph through injury.

Neymar’s club career, on the other hand, has witnessed league titles, cup triumphs and in particular Champions League glory in 2015 with Barcelona. While another European triumph is still missing from his resume at Paris Saint-Germain, his goals in the round of 16 against Borussia Dortmund helped Les Parisiens reach the quarter-finals for the first time since he joined the club in 2017.

Neymar ruled out of PSG's game against Toulouse

Cuper takes over as Syria coach