It was the summer of 2007. A young James Milner stepped up to take a second penalty in the UEFA under-21 European Championship in the Netherlands. It was a unique moment as this was a penalty shootout. The England under-21 head coach Stuart Pearce looked on from the dugout, his mind travelling back to his miss at the 1990 World Cup semi-finals.

Milner had his problems though when he stepped up. Like Gascoigne in that very game then some 17 years ago, Milner too was suspended from an international final. His yellow earlier in the game now ensuring that this was his final kick of the tournament. Milner ran up and scored. Twice. It was not enough as England were beaten 13-12 in an extraordinary shoot-out.

Two years later, in Sweden, it was déjà vu for the English. It was a semi-final penalty-shootout against the host nation again. A more experienced under-21 Milner stepped up. This time Milner missed; however, this time, England won. Twenty-five years of hurt for the under-21s and they would face old rivals Germany in the final.

Milner made his 46th England appearance in that final. A national record for a well-respected figure of that age group. He could not though deny Germany in what ended up as a 4-0 thrashing. The senior team was calling, but there were serious concerns that he would not be able to deliver on a higher level. 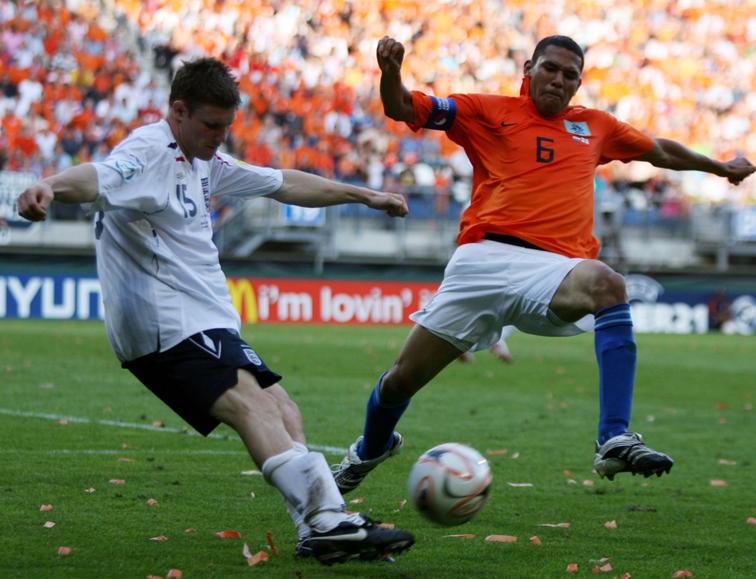 Milner made his senior debut the following month when he came on a substitute in a friendly against the Netherlands. England qualified for the FIFA World Cup later that year in South Africa, and Milner was named in the final 23-man squad by Fabio Capello.

A loyal servant to the Italian who at the time Milner labelled as the best coach in the world, the midfielder set up Jermain Defoe’s winning goal in the crucial must-win game against Slovenia. It had become a difficult tournament for the English with two opening draws. He was to be denied by Germany again. A 4-1 humiliation would end Milner’s and England’s competition in the round of 16.

After a disastrous World Cup campaign, Milner’s England career survived. He was one of only three survivors that played in England’s friendly straight after their tumultuous battle. Milner would also end the year captaining his country for ten minutes in a narrow loss to France that November.

By the time the 2012 UEFA European Championships arrived, Roy Hodgson was now the boss of England. Milner was selected again, and his place was justified immediately.

In the searing heat of Donetsk, Milner ran 1.4 kilometres than any other England player. He had claimed later than he could run up to 13 kilometres on average - a staggering involvement. However, despite his running, Milner could barely find the feet of his teammates.

In England’s final group game against Ukraine, Milner could only manage nine completed passes. Steven Gerrard ended up with 53. However, with his intelligence and robustness, Milner was crucial. As mentioned earlier, he was an experienced campaigner on the international front, for the under-21s at least. Still, he was now a player that had completed more than 500 professional matches by the age of 26. Following England’s defeat to Italy in the quarter-final stage, Milner’s senior international was not at all like his under-21s career.

Milner scored his first and only goal two months after the tournament’s conclusion. He scored in the 5-0 thrashing of Moldova in September. It was a victory that helped England qualify for the 2014 FIFA World Cup in Brazil. However, worse moments were to come for Milner and England team.

Highly regarded as a critical player for England at the World Cup in Brazil, Milner’s fitness would become crucial to the midfield once again. Milner was by now a two-time Premier League champion with high flying Manchester City, but he was frustrated by his lack of game time with the Citizens.

His frustrations continued into the World Cup, which was a disastrous campaign right from off for Hodgson’s side. Defeats to Italy and Uruguay had ended England’s challenge with a game still left to play. A draw with already-qualified Costa Rica added to their woes.

The 2016 European Championships were to be Milner’s last international competition. He had told the assembled press that March that international retirement was on the cards. If the manner of his nation’s performance warranted criticism in 2016, it would be tested ten-fold in France.

Before a kicked ball, UEFA had just named James Milner as the fifth-best player in the competition through a selection of algorithms over the year based on form and performances. It was a glowing report on Milner, but he would play a minuscule in the 2016 finals.

It would be a dramatic five-minute spell in England’s opener against Russia, where Milner and a handful of players faced criticism for not closing down the cross that led to Russia’s equaliser in stoppage time.

England scraped through, and it was Iceland next in the round of 16. Most English supporters expected a comfortable victory. Perhaps the players did too. It was ultimately an embarrassing night for the English as they lost 2-1, with Milner watching the horror unfold before his very eyes. It ended up being Hodgson’s last game, and Milner’s too.

Two months later, Milner announced his retirement from international football, following discussions with the most successful England manager of all time, Sam Allardyce. A move made just a week before his ninth anniversary with the senior team. That was the end of Milner for England.

He still plays for Liverpool and is probably about to become a Premier League champion for the third time. A trusted player who perhaps did not light up the international stage, but could do the job required entirely. A multiple champion on the club scene, Milner’s career on the international scene, particularly with the senior side, will be one sadly of unfulfillment, and that is hardly his fault.

Next Coronavirus: Super Lig plans to resume from June 1
Read