England could be without Mason Mount for Wednesday's World Cup qualifier against Poland at Wembley.

Mount was absent from Tuesday's training session, with the Chelsea midfielder undergoing work with the medical and performance team, though no injury details were revealed.

It would represent a blow to England, with Mount having scored in Sunday's 2-0 win over Albania.

That result made it back-to-back victories for the Three Lions in Group I, in which Poland likely pose their greatest threat.

Mount has been a key man for Chelsea this term, playing more minutes (2,231) than any of his team-mates, while his 69 chances created is 41 more than anyone else.

He has been a creative pillar for the Blues, as further evidenced by his 168 passes into the box being by far the most among Chelsea players, while the fact he quickly won his place back after being left out for Thomas Tuchel's first game in charge speaks to his impressive mentality.

Poland suffered a huge injury setback of their own when record goalscorer Robert Lewandowski was forced to return to Bayern Munich to receive treatment on a knee injury.

The striker sustained damage to the collateral ligament of his right knee during the 3-0 win over Andorra, in which he scored twice.

Poland issued a statement on Monday to confirm Lewandowski would miss Wednesday's match in order to avoid the risk of aggravating the injury.

The 32-year-old has instead returned to Germany for further treatment, which is expected to last from five to 10 days.

Poland have also lost Grzegorz Krychowiak and Kamil Piatkowski, who become the latest players to test positive for coronavirus.

Midfielder Mateusz Klich was the first squad member to return a positive COVID-19 test last week and it was revealed on Saturday that goalkeeper Łukasz Skorupski had also contracted the virus. 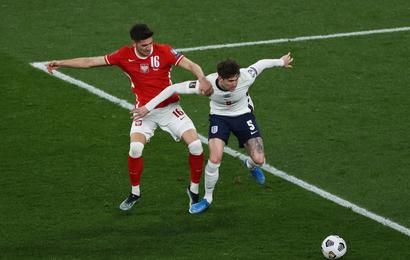