Watch the Live Stream for Wolfsburg Vs Dortmund via beIN CONNECT

VfL Wolfsburg host Borussia Dortmund on Saturday afternoon at the Volkswagen Arena with the hosts looking to close their 11-point deficit to Leverkusen in 5th place.

Wolfsburg may yet have been even farther back from Leverkusen if not for the fact they have been in impressive form, winning four and drawing three of their last seven Bundesliga games, holding high-flying Leipzig to a stalemate last time out.

Dortmund, of course, smashed Schalke last weekend, even if they chose to let Jadon Sancho watch for 79 minutes. Taking all the headlines, a win for the visitors here will see them put pressure on leaders Bayern Munich, closing the 4-point gap at the top to just 1 before Bayern themselves play Eintracht Frankfurt later that night.

Dortmund are on a 5-game winning streak, and 3 points here would match their best ever run under Lucien Favre. They are likely without their regular captain Marco Reus, who is still recovering from an adductor injury which may rule him out of Der Klassiker next week as well.

Wolfsburg have already scored 18 goals in their nine Rückrunde matches so far (the second half of the Bundesliga season), which is as many as they scored in the first 17 games (the Hinrunde).

Wolfsburg have lost their last four Bundesliga home games against Dortmund by an aggregate scoreline of 11-2.

Dortmund have taken 24 of a possible 27 points in the second half of the Bundesliga season – only Bayern can top that (25). Dortmund have only had a better record at this stage of the campaign in their title-winning season in 2011/12 (25 points). 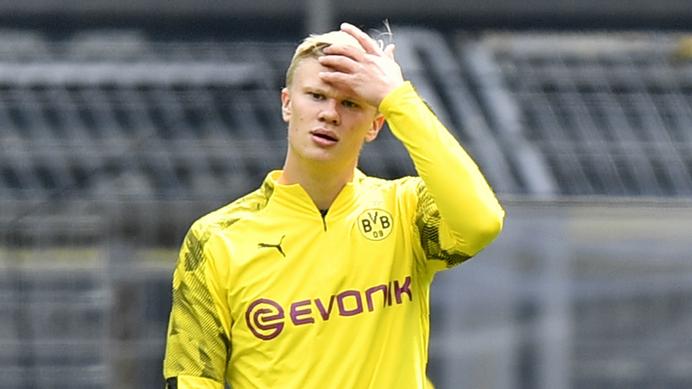 Renato Steffen - All five of his Bundesliga goals so far this season have come in 2020, with no other Wolfsburg player having scored as many in this calendar year. Three of his last four goals have been headers. He will have to work hard to continue this run this weekend, with Dortmund only conceding 5 goals from headers so far this season.

Erling Haaland  - Already bagging 10 goals in his first 9 Bundesliga games, Haaland will equal a Bundesliga record by scoring an 11th goal in his 10th game. With Borussia Dortmund boasting the best shot conversion in the league (25.9%, far above second-placed Bayern Munich), and able to call upon the likes of Jadon Sancho, THorgan Hazard, and Achraf Hakimi - all of whom are in the top 5 in the league in terms of Assists and Chances Created - Haaland is more than likely to make his mark yet again.

Dortmund will likely end Wolfsburg’s unbeaten run this weekend, and after last week it appears as though BVB are firing on all cylinders. Wolfsburg is simply not on the same level as Dortmund, with their recent head to head record suggesting that this is a bad matchup for the home side.

Dortmund creates many chances - and finish them well - is a bad sign for any opposition, and Wolfsburg are not poor defensively, they have conceded the first goal in 14 of their 26 games so far this season and have only managed to win 1 of them, losing 6.

Dortmund wins 76% of the games in which they score first and do that often. With a squad teeming with attacking talent, there could yet be goals on show at the Volkswagen Arena.

Watch the Bundesliga clash between Wolfsburg and Dortmund Live on beIN SPORTS with Angus Scott and Nigel De Jong on Saturday 23 May, at 1600 Mecca/1300 GMT on HD 11. Go to www.bein.net for more news, details, and updates for all your favourite live sports.