Fortuna Dusseldorf’s visit to the Allianz Arena on Saturday night represents another opportunity for Bayern Munich to lay down a marker in their relentless march towards yet another Bundesliga title. Seven points clear of second-placed Dortmund after their victory in Der Klassiker, Bayern could see their lead at the top stretch to double figures even before Dortmund or third-placed Leipzig play their own games on Matchday 29.

Fortuna’s last league visit to the Allianz ended in an astonishing 3-3 draw, with Dodi Lukebakio’s last gasp equalizer also securing his own hattrick against the Bavarians. Lukebakio has since moved to Hertha Berlin, and Fortuna has struggled this season, mired in the relegation dogfight.

Currently, in the play-off place, they seem to be clear of the two clubs beneath them (Werder Bremen and Paderborn) but will need every scrap they can get with six games to go in the season. New manager Uwe Rosler has seen an upturn of results though, Fortuna unbeaten in their last six including a 2-1 win over Schalke last time out.

Bayern are unbeaten in 11 Bundesliga matches against Fortuna (W9, D2). The record champions have scored at least three goals in their last six meetings with the Rhineland club - 24 in total.

Thomas Müller has had a direct hand in 10 goals in his last five Bundesliga games against Fortuna (five goals, five assists).

Fortuna have suffered more defeats (29) and conceded more goals (117) against Bayern than against any other Bundesliga club.

Fortuna have failed to score in 22 of their 49 Bundesliga meetings with Bayern - another unwanted high. 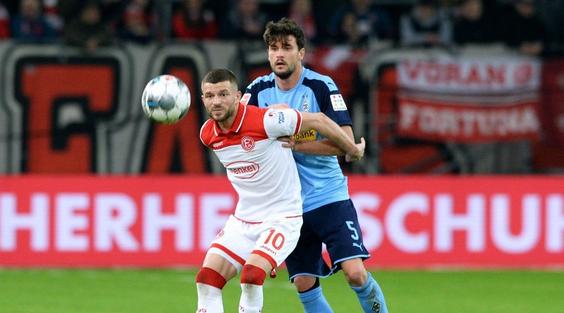 Robert Lewandowski - With 229 goals in 316 Bundesliga games, you would think that the league’s record non-German scorer should always be the man to watch, but he has never scored against Fortuna, the only one of the Bundesliga’s 18 clubs that has thus far escaped his wrath. Already with 27 goals this season, Lewandowski is aiming to be the Bundesliga’s top scorer for the fifth time, and for the third consecutive season. The Polish marksman will say that what matters most is the win, but nobody will be surprised if he is just that little bit more motivated than usual to make his mark on Saturday.

Rouwen Hennings - Fortuna’s captain and top scorer scored 11 goals in 16 games before the winter break, contributing 61% of his team's goals during the period. The burly striker has sometimes been compared to Italian legend Christian Vieri, his predatory nature complemented with a rocket of a left foot. Hennings was actually contracted to Burnley when he first played for Fortuna - on loan - though has gone on to become a key figure in their promotion from the second tier of German football, and their current fight against relegation. Heroics aside, Hennings has not scored against any of the top six this season, however.

While true for just about every Matchday in the Bundesliga, Bayern are simply too good for the opponents. Lewandowski aside, Muller, Davies, and especially Kimmich are playing at an elite level that nobody in the Fortuna side should be able to match, and with the Bundesliga title within reach, the hosts are unlikely to slip up. Bayern are still to play Leverkusen and Gladbach in the weeks to come, and so will want to put away 16th-placed Fortuna as quickly and efficiently as possible

Watch the Bundesliga clash between Bayern Munich and Fortuna Dusseldorf Live on beIN SPORTS on Saturday 30 May. Coverage of the day’s action starts at 1600 Mecca/1300 GMT on HD 11. Visit www.bein.net for more news, details, and updates for all your favourite live sports.