A last-minute Xherdan Shaqiri breakaway goal handed Switzerland victory Friday as they came from behind to defeat Serbia 2-1 in Kaliningrad.

The win puts Switzerland in pole position to make it out of a tough Group E that contains five-times winners Brazil but they were pushed all the way by the Serbs.

It was a sweet victory for Shaqiri and fellow Swiss goalscorer Granit Xhaka, who along with team-mate Valon Belrami were booed relentlessly by Serbia's fans throughout.

Shaqiri, Xhaka and Belrami trace their roots to Kosovo, a former province of Serbia, a fact which had stoked tensions before the match.

Both Shaqiri and Xhaka pointedly celebrated their goals by making an eagle gesture with their hands, viewed as a symbol of defiance.

Serbia raced out of the blocks, funnelling possession to Southampton winger Dusan Tadic on the right flank, who troubled Switzerland with his crossing all match.

An Aleksandar Mitrovic header forced a smart save from Swiss keeper Yann Sommer after four minutes.

Seconds later, Tadic took the ball past left-back Ricardo Rodriguez, cut back on his favoured left foot and delivered a majestic cross that Mitrovic duly buried with his head.

In a frenetic first half, Switzerland had more of the ball but were sloppy with it, giving away possession in advanced positions and sending Serbia on the break.

Switzerland, who came to Russia ranked ahead of the likes of France and Spain, felt their way into the game as the first-half progressed.

On the half-hour mark, Steven Zuber cleverly teed up Blerim Dzemaili but the Hoffenheim man got his feet in a muddle and Vladimir Stojkovic was able to parry away.

But it was Serbia, who beat Costa Rica 1-0 in their Group E opener, who nearly went in two up.

Nemanja Matic missed a glorious chance to double the lead just before the break when Tadic's in-swinging corner found him unmarked at the back post but the Manchester United midfielder couldn't sort his feet out.

Matic said during the build-up the team were expecting a "hellish" encounter with the Swiss, who in their game with Brazil fouled star forward Neymar 10 times alone.

Switzerland grew in stature after the break and were rewarded with a spectacular equaliser courtesy of Xhaka's 52nd-minute piledriver.

They had the better chances in the second period, with Shaqiri's curling effort from the edge of the area grazing Stojkovic's bar on the hour mark.

Coach Vladimir Petkovic brought on attackers Breel Embolo and Mario Gavranovic in a bid to force a winner, and Gavranovic forced a smart save from Stojkovic from a close range effort with 10 minutes remaining.

But it was Stoke City winger Shaqiri who struck the decisive blow, breaking through Serbia's offside trap to slot home calmly as the 90 minutes wound down.

Serbia will now need something from their final Group E match against Brazil, while a draw against Costa Rica would see Switzerland through.

Serbia can all but book their place in the round of 16 with a victory over Switzerland in Kaliningrad, although the eastern European side will have a tough test against a Swiss side who held Brazil 1-1 in their Group E opener.  A victory will mean that Serbia will qualify for the round of 16 for the first time as playing as an independent nation.

A well taken free kick from Aleksandar Kolarov was the difference maker in the opener against Costa Rica. Mladen Krstajic’s side will certainly not be lacking motivation ahead of the game on Friday evening.

Lazio midfielder Sergej Milinković-Savić impressed against Costa Rica, with the 23-year old pulling the strings in the centre of the park. Surprisingly Milinković-Savić was not utilized in qualification for the World Cup, however, stand out performances for his club side convinced Krstajic to take the player to the tournament. Now, Milinković-Savić who is nicknamed ‘SMS’ in his homeland is attracting attention from the likes of Real Madrid & Manchester United. Another impressive performance against Switzerland could add a few more millions to his price tag. 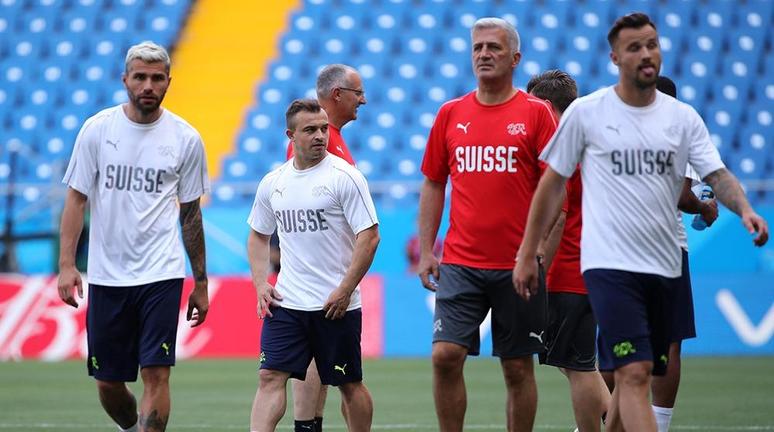 As for Switzerland, they showed their defensive qualities in the 1-1 draw with Brazil, successfully suppressing the attacking talents of the Seleção.

The game against Serbia should be a little more open, which could highlight the attacking talents of Die Nati as they look to get the better of their Group E opponents. The game could be a perfect opportunity for Stoke City winger Xherdan Shaqiri to strut his stuff. The diminutive winger is one of the key attacking threats for this country, and the 26-year old will be relishing the battle against an ageing Serbia backline.

It promises to be an interesting tie as Serbia take on Switzerland in Kaliningrad. Watch the Live & Exclusive stream of the game on MAX HD3 & beIN SPORTS CONNECT.