You can watch the stream of Spain Vs Morocco Live & Exclusive on beIN SPORTS CONNECT.

Spain booked a last-16 World Cup clash with hosts Russia after a last-gasp 2-2 draw against already-eliminated Morocco in Kaliningrad.

The 2010 champions started Monday on top of Group B but seemed certain to slip below their Iberian rivals in the final table as both matches entered stoppage-time with Portugal and Morocco leading.

Spain went behind when Andres Iniesta and captain Sergio Ramos somehow allowed Khalid Boutaib to seize upon a loose ball and run clear to score Morocco's first goal at the finals since 1998.

Iniesta soon made amends, though, skipping through the Morocco defence to set up Isco for a quickfire leveller, with La Roja unable to break down their opponents despite dominating.

When Morocco substitute Youssef En-Nesyri got up highest to thump home a brilliant header from a Faycal Fajr corner with nine minutes to go, Herve Renard's men looked set to claim a memorable victory.

But after another substitute, Iago Aspas, tucked in a superbly improvised finish that survived a lengthy VAR review for offside, while Iran struck a late penalty, La Roja somehow finished top of the group.

Spain showed signs of their bewitching best in possession but Fernando Hierro's side must show serious improvement in the knockout stages if they have ambitions to claim their second World Cup.

A testy start to the game saw Gerard Pique perhaps fortunate to avoid punishment for a two-footed lunge on Boutaib.

Morocco's lone forward then gave his side a shock lead in the 14th minute, capitalising on a terrible mix-up between Ramos and Iniesta.

The duo's shared lapse in concentration allowed Boutaib to steal possession on the halfway line, burst through on goal and slot a neat finish through the legs of David de Gea.

That goal proved Spain's wake-up call, Iniesta and Diego Costa combining quite brilliantly to set up Isco for a slammed close-range finish that levelled the scores five minutes later.

Boutaib scampered clear again in the 25th minute when Morocco took a quick throw-in, but De Gea - beaten from all four shots on target he had faced at the World Cup - stayed tall to save.

Morocco threatened to lose their discipline with Nordin Amrabat, Manuel da Costa and Moubarak Boussoufa all booked in a tempestuous three-minute period before Sergio Busquets planted a free header from Isco's corner over the crossbar.

Pique was lucky again early in the second half when the defender appeared to handle the ball in the box, with Morocco agonisingly close to regaining the lead in the 55th minute.

Given space to let fly from at least 25 yards out, Amrabat's strike had De Gea completely beaten but the goalkeeper gratefully saw the ball bounce off the woodwork.

Isco thought he had added to his nine Spain goals scored since the start of 2017 with his looping header dipping under the crossbar, but Romain Saiss made a sensational clearance, Pique heading wide from the resulting Isco corner.

Although only Iran shocking Portugal could have dumped Spain out, En-Nesyri thundered home a stunning header that left De Gea helpless again.

And when Aspas turned home Dani Carvajal's cross after a short corner - the goal given by VAR after a long delay, Spain were level in the first minute of added time.

Goal! Morocco take the lead on the breakaway! Khalid Boutaïb with the Atlas Lions first goal at the World Cup!

Spain will be looking to seal their place in the round of sixteen when they take on an already eliminated Morocco in Kaliningrad on Monday evening.

La Roja battled past Iran, picking up a narrow 1-0 win with Diego Costa eventually settling the tie with a well-taken goal just before the hour mark. Now, Spain who had sacked boss Julen Lopetegui on the eve of the competition are on the verge on making the round of sixteen and know that a victory over the Atlas Lions keeps their fate in their own hands.

In team news, Thiago Alcantara is expected to replace Andreas Iniesta in central midfield and the Bayern Munich player could have a telling impact against Morocco. The 27-year-old has come on for Iniesta in the previous two group games and has impressed in his cameo roles. Spain will look to dominate possession on Monday, and Thiago will be key to setting the tempo in Kaliningrad. 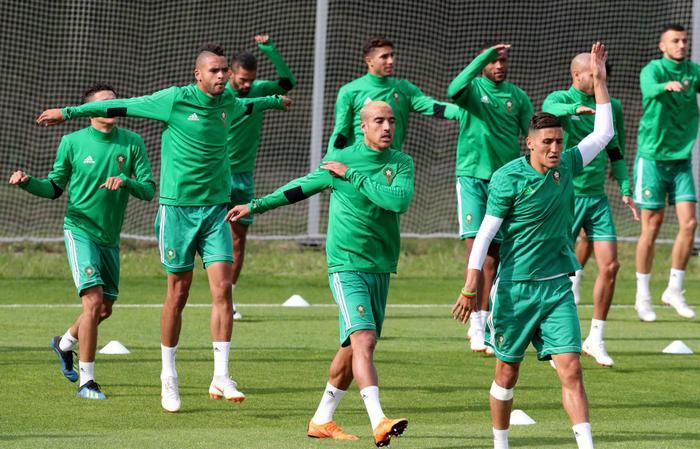 The Atlas Lions are playing for pride in their final World Cup game, after being already eliminated following their narrow 1-0 defeats to Iran and Portugal.

Heve Renard’s side has played some impressive football, but have lacked that decisive cutting edge in the final third. At least one goal will be the aim against Spain, as Morocco target to score their first goal of the competition.

Hakim Ziyech still looks like the Atlas Lions most likely player to score against Spain and restore some pride for the side. The Tricky Ajax playmaker has shown glimpses of his attacking flair against Iran and Portugal, and the 25-year old will not be wanting his World Cup to go out on a whimper, especially with a host of top European sides looking at the player.

It promises to an Interesting contest as Spain look to book their spot in the round of sixteen, but face a spirited Morocco team who are playing for pride. Watch the Live & Exclusive stream of the game on MAX HD3 & beIN SPORTS CONNECT.