Mayor of Munich Dieter Reiter said on Monday (AEST) that he has asked UEFA for permission to illuminate the stadium in support of the LGBTQ+ community.

Reiter made the request after Hungary passed a law that prohibits the sharing of content in schools that could be deemed to promote homosexuality and gender change.

However, while UEFA understands the gesture, European football's governing body has proposed alternative dates for the stadium to be lit up, rather than on the day of the Hungary game.

"Racism, homophobia, sexism, and all forms of discrimination are a stain on our societies – and represent one of the biggest problems faced by the game today," read a UEFA statement on Tuesday.

"Discriminatory behaviour has marred both matches themselves and, outside the stadiums, the online discourse around the sport we love.

"However UEFA, through its statutes, is a politically and religiously neutral organisation. Given the political context of this specific request – a message aiming at a decision taken by the Hungarian national parliament – UEFA must decline this request.

Christopher Street Day is an annual European LGBTQ+ celebration and demonstration held in various cities across Europe for the rights of the LGBTQ+ community.

But amid widespread criticism, the probe was halted after the governing body deemed it "a good cause".

Next Wembley to host more than 60,000 fans for Euros
Read 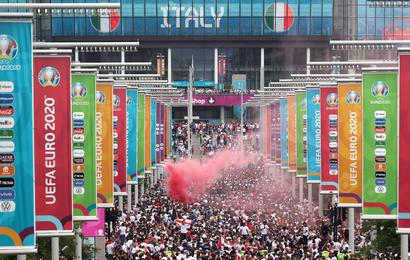