City can move to within a point of Liverpool if they beat Brighton and Hove Albion at the Etihad Stadium on Wednesday - the first of two games they have in hand on the reigning champions.

Guardiola's side has been bolstered by a 13-match unbeaten run, spanning four competitions, and the sort of consistency that appeared beyond it as it spluttered through the opening weeks of 2020-2021.

Still nursing the hangover from a humbling 3-1 Champions League quarter-final defeat at the hands of Lyon in August, City won only three of its opening eight Premier League games this season.

Recent victories over Chelsea in the top flight and Manchester United in the Carabao Cup semi-finals have seen City look something far more like its old self.

Guardiola feels this is in part because the team are back in tune with his principles - something that suffered as last season bled into this in the absence of normal preparations.

"From day one [we had these principles]. We lost it a bit this season, that was my fault - the message was not clear but we came back a little bit [to] the principles," he said. "Especially the reason [for poor form] was because the players need time to get the best condition after no pre-season.

"It’s normal that, after good results and performances, the people visualise again that we can do it again in the way we did it in the past. And that is the way we have to continue."

Guardiola = feels City's improvement is down to the players doing their work more smartly during games than they were earlier in the campaign.

"The only difference is that we run less, we were playing running too much," he said. "When you play football you have to walk – or run much, much less.

"Without the ball you have to run. But with the ball you stay more in the position and let the ball run, not you. And we improved in these games, in these terms."

Tracking data collected from this season's Premier League games does not exactly bear out Guardiola's point but might align with the greater discipline he alludes to.

In the 3-1 triumph at Stamford Bridge earlier this month, the 116.7 kilometres City covered collectively was its most in any league match this term, with its 163 sprints second only to 166 in the 1-0 victory at Southampton in mid-December that launched an ongoing winning run of six matches on three fronts.

A feature common to both those games was each of Guardiola's recognised strikers, Sergio Aguero and Gabriel Jesus, being sidelined.

Guardiola's team was striker-less at the beginning of the humiliating 5-2 home defeat to Leicester City in September, although youth team centre-forward Liam Delap came on when the score was 1-1.

A draw at Leeds United followed and in the four games since when neither Aguero nor Jesus has been available - versus Sheffield United, Southampton, Newcastle United and Chelsea - City has won each time.

"We have to adapt the quality we have, unfortunately it's a long time without Sergio," Guardiola said. "Gabriel has been good but had COVID. But we have enough players with the quality playing wide and in the middle so we adapt with the players we have right now."

Jesus is in contention to face Brighton but Aguero continues to self-isolate after coming into close contact with someone who tested positive for coronavirus. 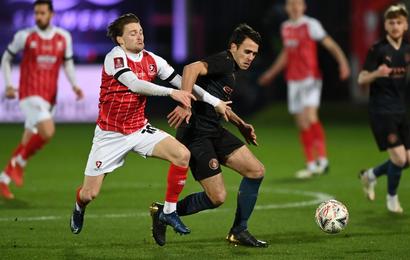