Alonso has built a reputation as a highly rated young coach since returning to his first club.

He took La Real's youngsters – often known as Sanse – to a fifth-placed finish in Segunda B2 in his debut campaign, before surpassing expectations the following year.

Alonso secured Sanse's first ever promotion to the second tier in the 2020-2021 season as they finished top of Subgroup 2A and Promotion Group 2C in the reformatted Segunda B.

OFFICIAL ANNOUNCEMENT | @XabiAlonso will not continue at la Real next season.

The club's doors will always remain open so that we can bring our paths back together again. See you soon Xabi!!! 🔵⚪🔵#THISISLAREAL | #AurreraReala pic.twitter.com/0BPPABoh6J

its relegation back to the third tier has already been confirmed despite having one match left, but Alonso's spell in charge has largely been considered a success.

According to local reports, La Real wanted Alonso to take charge of the senior team for the upcoming 2022-2023 season, such is the regard president Jokin Aperribay holds the former Spain international in.

But incumbent head coach Imanol Alguacil is said to have rejected the offer of a promotion to a directorial position as head of the club's academy in a suggested management reshuffle.

Alonso's departure was announced soon after such rumours began to surface.

"Xabi Alonso will not continue at Real Sociedad once the 21-22 season is over," a statement read. "The coach from Tolosa, coach of Sanse for the last three years, will leave the txuri urdin club having completed a brilliant stage, in which he achieved historic promotion to [the second tier] and enriching, thanks to his knowledge and involvement, the training and progress of the players of our subsidiary, many of them having debuted during this time with the first team.

"Xabi Alonso will not continue at Real Sociedad next year, but the doors of the txuri urdin club will always remain open to be able to join their paths again.

"Real Sociedad wishes to thank Xabi Alonso for the dedication, effort, commitment and involvement shown in the three years in which he has remained at the club in this stage as a coach and wishes him the best for his personal and professional future." 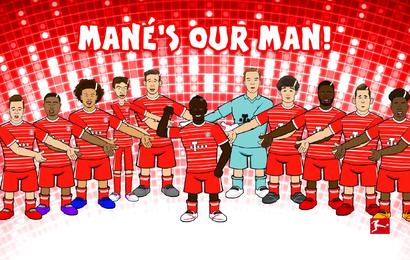