Henrikh Mkhitaryan scored a late winner as Borussia Dortmund came from three goals down to beat Tippeligaen side Odd 4-3 in the first leg of their UEFA Europa League play-off qualifier at the Skagerak Arena.

Despite its fantastic start to life under new head coach Thomas Tuchel, Dortmund were shell-shocked as Jone Samuelsen gave Odd the lead after just 14 seconds.

However, two goals either side of half-time for Dortmund – which hit the woodwork four times – from Pierre-Emerick Aubameyang and Kagawa put the visitor back into contention.

Tuchel's men kept a clean sheet in all four of their competitive games prior to the trip to Norway, but Dortmund was undone immediately as Samuelsen stole in at the near post to head home Rafik Zekhnini's cross.

Dortmund almost equalised one minute later, Kagawa denied by the crossbar with a rasping drive from the edge of the box.

In a frantic opening, Nordkvelle fired a low effort at Roman Weidenfeller – who replaced Roman Burki in the line-up – after skipping through the midfield unchallenged

But Dortmund failed to learn its lesson and was 2-0 down after 20 minutes as Nordkvelle, once again unmarked, latched onto Olivier Occean's pass before slotting calmly past Weidenfeller.

The veteran goalkeeper was hapless once again as Ruud smashed in Odd's third two minutes later, the full-back finding the top-right corner from a free-kick 35 yards out.

Mkhitaryan clipped the left-hand upright with a low shot from distance as Dortmund tried to forge its way back into proceedings, which it finally did when Aubameyang nipped in to prod home after Ilkay Gundogan's effort had been spilled by Sondre Rossbach.

Dortmund then made the perfect start to the second half as Kagawa volleyed into the bottom left-corner of the net from Marcel Schmelzer's cross.

Tuchel's side continued to press and would have been level if not for a superb save from Rossbach, who tipped Aubameyang's sensational strike onto the right-hand upright and away from goal.

However, Aubameyang finally had his second after 75 minutes, finishing low into the left corner after being found in the box by Schmelzer.

Gundogan then struck the bar with 10 minutes remaining before Kagawa's cross found Mkhitaryan, who duly headed home to complete the turnaround and spare Dortmund's blushes 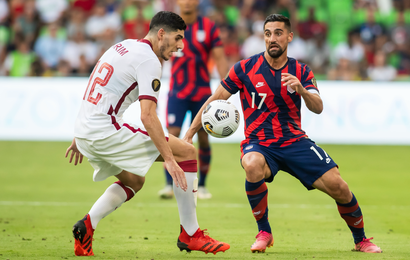