Neither team could progress from Group I after respective humbling defeats to Russia last month, yet Scotland has a home play-off semi-final to come in March 2020.

It moved above host Cyprus into third in the standings here, too, victorious despite the absence of big names Andrew Robertson, Kieran Tierney, Scott McTominay and Ryan Fraser.

Christie's first international goal put Scotland ahead after 12 minutes, before Giorgios Efrem equalised and McGinn hit back in the space of six second-half-minutes, seeing Scotland to a second 2-1 win over Cyprus in this campaign.

Cyprus came agonisingly close to opening the scoring inside six minutes as former Rangers winger Efrem smartly worked space inside the area and crashed a shot against the underside of the crossbar.

The ball seemingly bounced over the line but, with no technology to assist the officials, was not awarded as a goal.

There was no stopping the opener that followed at the other end, with Christie darting inside from the right and curling a glorious left-footed effort in from 20 yards.

Even better was to come from Efrem at the start of the second half, however, as he met a half-cleared set-piece with a sweetly struck volley that faded away from David Marshall into the top-right corner.

It proved merely a momentary setback for Scotland and it soon led again through McGinn, meeting Greg Taylor's cross and directing a left-footed finish past Urko Pardo.

Ioannis Kosti should have levelled matters again but sent a stooping header just wide, while Fotios Papoulis was guilty of a glaring stoppage-time miss as Scotland held on.

This stage of qualification ends for these two sides on Wednesday (AEDT), as Scotland hosts Kazakhstan while Cyprus visits Belgium.

However, Clarke's side has at least one more match still to come in the play-offs next March.

Griezmann to the fore in Deschamps' 100th match

Germany not among Euros contenders: Kroos

Croatia and Austria qualify for Euro 2020 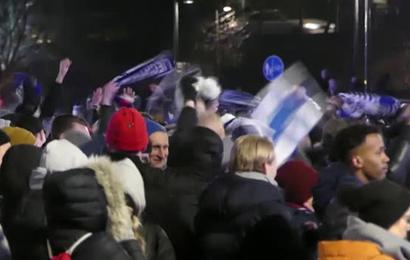