1. Hollywood megastar Russell Crowe is a huge Leeds United fan and voiced ‘take us Home’ – an Amazon documentary about the club’s first season under Marcelo Bielsa.

2. In 2015 Crowe asked his Twitter followers whether he should buy the club. "I looked into it quite seriously with a group of people,” he told the Yorkshire Evening Post. "I firmly believe it’s the great sleeping dinosaur of English football."

4. In 2019 Leeds was fined £200,000 over 'spygate' after manager Marcelo Bielsa revealed he had sent employees to 'spy' on all of Leeds's rivals. The frank admission is said to have earned begrudging respect for the Argentinian tactician.

5. Spying aside, Bielsa's attacking tactical methods are known to have influenced the likes of Jorge Sampaoli and Pep Guardiola.

6. In August 2003 Aaron Lennon became the youngest player at the time to appear in the Premiership when he came on as a substitute for Leeds in a game against Spurs.

7. Leeds fan favourite Lucas Radebe twice left the outfield to fill in as ‘keeper in 1995-1996, once against Middlesbrough and once against Manchester United.

8. Such was Radebe's popularity among fans that English band Pava changed its name to Kaiser Chiefs in honour of the club Radebe left to join Leeds in 1994.

9. Radebe remains the Leeds player with the most international caps, having represented South Africa 70 times.

10. Leeds United was born out of the ashes of Leeds City after it was expelled from the English Football League in 1919. Among other indiscretions, the club was found to have been making illegal player payments during the first World War.

11. Leeds United's rich and complicated rivalry with Huddersfield emerged around the same time, when Terriers Chairman Hilton Crowther lent Leeds 35,000 pounds, to be paid back when the club made the top division.

Crowther wanted to merge Huddersfield and Leeds but such was the outcry from Terriers fans, they banded together and bought Crowther out. Crowther became Leeds chairman.

Leeds gets the better of Huddersfield this season:

13. In 1973 Leeds, playing under the guidance of legendary Don Revie, became the first British club to sell replica shirts, teaming up with gear merchants Admiral. Revie saw it as a secondary revenue opportunity.

14. Revie famously wanted Leeds to be 'the Real Madrid of Yorkshire', so he introduced the famous all-white strip in an homage to the Spanish giant.

15. When Revie left Leeds to take the England job, the club appointed Brian Clough, who lasted just 44 days in the role. Clough's miserable tenure at the helm was punctuated by conflict between he and the players and is said to the be inspiration for David Peace's famous novel The Damned United.

16. Iconic home ground Elland Road was originally named 'The Old Peacock Ground' after a pub that remains outside the southern end of the venue to this day.

19. It wasn't to be the last deal with the Red Devils that rankled fans. In 2004, Alan Smith became the last Leeds player to score against United in the top flight. When Leeds was relegated that season, Smith left to join Alex Ferguson's men, making the beloved Yorkshire local the subject of fans' wrath.

20. Leeds's youngest professional player was Peter Lorimer, who debuted for the club at 15 years-of-age.

21. Lorimer went on to become the club's record goal-scorer, with 238.

23. Malaga was the last club Leeds played against in European competition.

25. Leeds has played all but two of the 91 association clubs in England:  AFC Wimbledon and Crawley town

26. During the 1970-1971 season, Leeds wore an orange third kit in a 3-0 loss to Stoke. After the match irate manager Revie burned every kit and Leeds was never seen in orange again

29. In 2018 Leeds released an ill-fated 'fans salute' crest to the dismay of supporters. The badge, which depicted a supporter performing the so-called salute, prompted an online petition from fans which garnered more than 50,000 signatures. The crest was promptly scrapped.

31. During the break in play this season, the Billy Bremner statue - oft dressed up in Leeds merchandise by fans - was given a face mask to protect it from coronavirus. 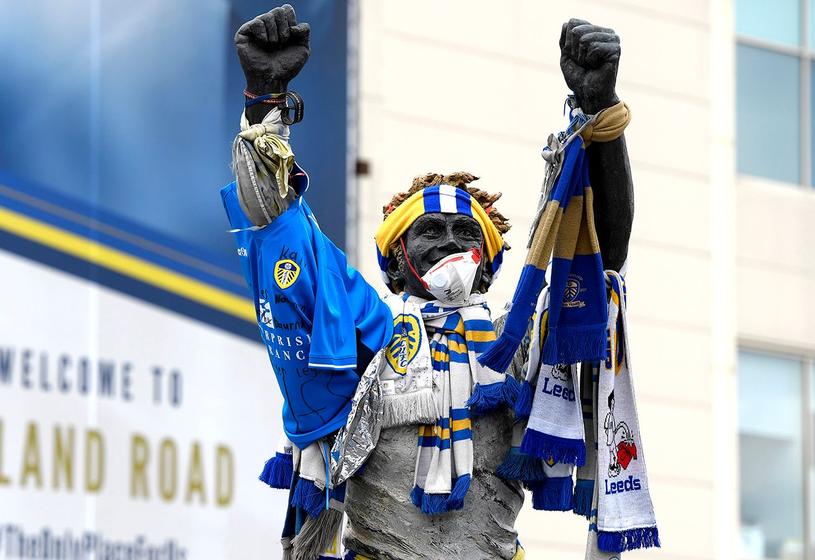 32. In 2007, Leeds reached its lowest ebb, going into administration and dropping to the third division, after a catalogue of financial setbacks, prompted by the inability to repay loans as a result of missing qualification for two consecutive UEFA Champions League seasons. Leeds returned to the Championship three years later.

33. Brian Clough is the manager with the worst winning record at Leeds, with 14%, closely followed by current Fortuna Dusseldorf boss Uwe Rossler, who managed a miserly 16% winning record at the helm of Leeds in 2015.