Check out the players that did make the Argentina squad here

Check out the players that did make the Brazil squad here 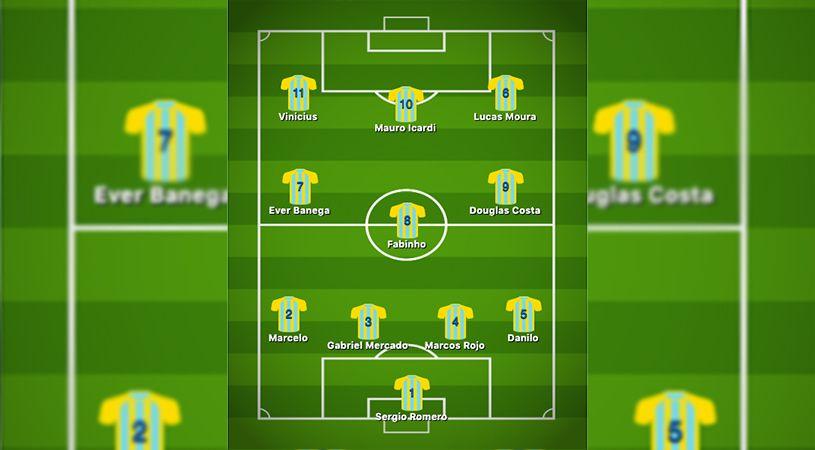 Romero's charmed run in the national team appears to be over, the veteran shot-stopper finally paying the price for lack of game-time. He still gets a call-up to our selection.

One of the highest-profile additions to our squad, the Real Madrid star found the going tough this season, as he was shipped in an out of Los Blancos' starting side. Marcelo returned to favour with the return to the Spanish capital of Zinedine Zidane, but by then his international card was stamped.

Mercado has been a mainstay with Argentina since 2016, but he's one of the most high profile victims of the tumult that has engulfed Argentinian football in that period. Edges out David Luiz in our team.

Rojo is another Argentina national team staple who has paid the price for a lean club season, where he's failed to cement a spot in the Manchester United defence. The Albiceleste rebuild has started at the very back and Rojo joins Mercado in our rejects selection.

Perhaps a victim of Manchester City's success, Danilo has struggled to get first team opportunities at right back ahead of Kyle Walker. He's been linked with a move to Inter Milan where game time would be all but assured.

Banega has paid the price for a lean season at Sevilla, where his form has failed to reach the lofty heights of previous campaigns. That said, the creative fulcrum slots in nicely to our creative department.

With Fernandinho recalled to the Brazil set-up, alongside Casemiro, there was no room for a player starting to find his feet at Liverpool.

Consistency is Costa's biggest issue, having never quite recaptured the world-beating form he displayed under Pep Guardiola at Bayern Munich. That said, on shear ability alone, his is a surprising omission from the Selecao's Copa America squad, such is his ability to break a game open with his pace and dribbling ability.

Injury crueled a campaign in which the Real Madrid starlet was finally establishing himself in the starting side after a tough entry to life at the Bernabeu. Still only 18 years-of-age, Vinicius will be part of plenty of squads to come, but he couldn't quite regain fitness in time for this one. Much to our benefit.

Perhaps the biggest rejected name of the list, Icardi has paid the price for a tumultuous season at Inter Milan, where he scored a bag of goals, was dropped as captain, was dropped entirely amid rumours he wanted to leave, returned to the side and pledged his allegiance to the club, but never quite recovered his best form in a campaign plagued by off-field issues.

Moura has stepped up when Tottenham needed him the most this season, notably in that epic UEFA Champions LEague comeback against Ajax, where his two goals sealed the unlikliest of final berths for the club. Those heroics weren't enough to get Moura into a talent-laden Brazil squad. Go figure.

Next Dani Alves to replace Neymar as Brazil captain
Read