Despite seeing Andre Silva drop to the bench after an injury in the warm-up – Emil Forsberg replaced him – Leipzig started brightly at Red Bull Arena.

Jesse Marsch made the switch to a three-man defence and it looked to be the perfect decision after Nkunku's opener inside 16 minutes.

The Frenchman was sent clean through on goal after Yussuf Poulsen's brilliant dummy from Lukas Klostermann's pass, and he provided a beautiful dinked finish over Alexander Schwolow.

Vladimir Darida tested Peter Gulacsi for the first time but moments later, he and his side were two goals down. The Leipzig No.1 started the counter-attack with Nkunku sent in behind down the left and he turned provider for Poulsen to slot home with a simple finish in front of goal.

Nkunku saw his next effort saved by Schwolow having been played in one-on-one, before Emil Forsberg rattled the crossbar.

Minutes later and Lukas Klostermann was denied from making it three after Poulsen was ruled offside by the video assistant referee (VAR).

Leipzig wasn't to be denied a third before the break, though, as Nordi Mukiele latched on to Angelino’s free-kick from deep to volley home across goal.

The hosts burst out of the blocks in the second half as Nkunku blazed over from inside the Hertha area, with Mukiele doing the same from nearly the same position minutes later.

Nkunku continued to torment the Hertha defence and he handed Forsberg the perfect chance for a fourth after being brought down in the penalty area by Niklas Stark, which Forsberg took with aplomb.

Nkunku capped off his perfect performance scoring the fifth Leipzig goal, floating a free-kick over the Hertha wall and beyond a stranded Schwolow, who could only watch the ball nestle in the top corner.

Amadou Haidara curled home a sixth after fine work from substitute Brian Brobbey in the build-up. Mercifully, that was the end of Leipzig's scoring gala as Marsch earned his second Bundesliga win. 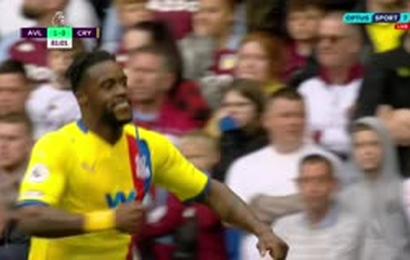