Should he win that match, Sinner will move ahead of Hubert Hurkacz in the race to qualify for this year's ATP Finals, while victory for Ruud will strengthen the Norwegian's standing.

Zverev was given a sterner test, eventually overcoming Alex de Minaur 6-2 3-6 6-2 in one hour and 42 minutes. The Olympic gold medallist will now face Felix Auger-Aliassime, who fought back from a set down to defeat Cameron Norrie.

Frances Tiafoe came from a set down to upset top seed Stefanos Tsitsipas 3-6 6-3 6-4 and earn a quarter-final meeting with Diego Schwartzman after the Argentine overcame Gael Monfils 7-6 (7-5) 4-6 6-2.

The Croatian, who won the title in Russia in his last appearance in 2011, was 4-1 down in the deciding set but took all five of the final games to triumph after two and a half hours on court.

"Everybody is playing good. The tournament is great. It's the end of the season, so everybody wants to finish on a great level," said Cilic, who next faces Roberto Bautista Agut. "For me, it was great to play this kind of a match today."

Next Rublev stunned by qualifier in St Petersburg
Read 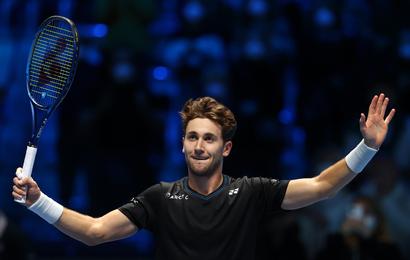