Roger Federer says the quest for more titles, rather than a return to number one in the world, motivates him to continue playing after sealing a record eighth Wimbledon crown on Sunday.

The Swiss maestro collected a 19th grand slam trophy on Centre Court with a 6-3 6-1 6-4 win over Marin Cilic - the 93rd title of his mesmeric career.

Federer's victory took him up to world number three, his highest ranking in almost a year after his 2016 season was cut short after Wimbledon due to knee and back injuries.

With no more points to defend this year, an assault on Andy Murray's top spot is on, with Federer or Rafael Nadal now likely to battle between themselves for the number-one ranking during the rest of 2017.

A 31-2 record for the year to date - concentrated to 14-0 in grand slams - has helped Federer win five of the seven tournaments he has entered this season.

"I'm playing for titles at this time in my career, rankings not so much," he said after partying until five in the morning with "too many different types of drinks".

"I have to check if it's worth chasing it. If you win the biggest tournaments, you will be rewarded by it but I have to be clever with my body."

When you spot your name on the #Wimbledon honour roll for the eighth time... pic.twitter.com/O09C7XmSHI

No man has ever won more than Federer's 19 slam titles, with Margaret Court's all-time tally of 24 a potential target.

However, Federer is content with his lot and will not put pressure on himself to rack up any specific numbers.

"I've not set my sights on a number of grand slams that I have to or want to achieve," he explained. "I never had that.

Next WTA Rankings: The Ladies Are on the Move!
Read 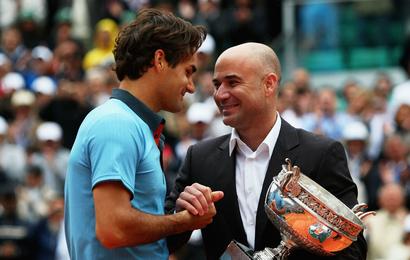