Safe for the moment, but pressure piles onto Solskjaer after historically bad home loss to Burnley

To one set of eyes who had already made a decision to remove even before the evidence was laid out, Wednesday’s further proof demonstrated in the clearest manner possible that an immediate change at the top was needed, no matter the enormous ramifications for the future. History and prestige must be protected.

But for others, the message was hold steady, keep the course, stiff upper lip and offer unflinching support no matter the pressure or the facts out on the field. Support and dedication should not waver with the times and bend to the will of a 24-news cycle desperate for drama.

It is this approach that is winning on Thursday as Ole Gunnar Solskjaer rides out the storm of Wednesday’s 2-0 home loss to Burnley (for the first time since 1962) to continue an historically dreadful season for the Red Devils. Since the Norwegian was made permanent manager in March, United have more EPL defeats (12) than victories (11).

Speaking on Wednesday after the loss, Solskjaer looked broken admitting that United’s performance was not good enough, but offering little hope of an improvement either in the transfer market or on the pitch.

But a booming share price for United to sate the appetites of the owners and the team still in fifth place in the EPL standings and in touching distance of the Champions League places sees no change at the top expected at Old Trafford despite the howls of protests of former players and fans.

The Sports Burst live show will be all over this one and everything else. Just head to our beIN SPORTS USA Facebook page, Youtube channel and beIN SPORTS XTRA channel at 12PM ET.

Another relatively big transfer is set to be completed on Thursday and once again it's the Bundesliga that is picking up the pace for a fairly slow winter window.

The former Barcelona youth team player has been a stalwart of the winter window gossip and is set be leaving Dinamo Zagreb.

The Dani Olmo of two years ago and another Dani, Ceballos this time, is still at Arsenal on loan from Real Madrid which Sports Burst had certainly forgotten. The midfielder reportedly wants out a brand new loan deal somewhere else after failing to play for the Gunners in the EPL since the beginning of November.

Edinson Cavani remains a problem for PSG to add to make it a trio of transfer trouble up front. Joining 'whither Neymar?' and 'whither Mbappe?' it's 'whither Cavani?'

The Uruguayan conjured up a groin injury to miss PSG's 3-0 Coupe de la Ligue semifinal win against Reims on Wednesday with both his Mom and Pop claiming that his club were out of order in not allowing their son an immediate move to Atletico Madrid.

Zion fits the bill for the Pelicans in NBA debut

College basketball is making the headlines again on Thursday in the US of A. Sort of. But rather than the giant all-Kansas brawl, it is the season's number one NBA draft pick Zion Williamson that is causing the buzz.

Williamson had missed the first 44 games of the season for the New Orleans Pelicans due to a knee injury but made his debut for the franchise on Wednesday night in the fourth quarter to rack up a 17-point scoring stretch in what was still a defeat for the Pelicans against the San Antonio Spurs.

"It was everything I dreamed of, except for the losing part," noted Zion who could feature again for the Pelicans on Friday against the Denver Nuggets.

.@Zionwilliamson didn't miss from distance, going 4-for-4 in the fourth quarter during his 17-point scoring stretch! pic.twitter.com/vylmrTvSLD

Also in action in the NBA on Friday are the Milwaukee Bucks against the Charlotte Hornets, which would be unremarkable if it were not for the fact that it is being played in Paris. Spot a disguised Antoine Griezmann in the crowd for that one before dashing off to play Valencia 12-hours later on Saturday.

"Basketball chose me, but I could be in this locker room with @neymarjr and @KMbappe."

Later today / tomorrow - it's a confusing - both Serena Williams and Coco Gauff will be in action at the Australian Open third round.

While Serena's rather excellent form is expected to take her past the 27-seed Wang Qiang, the 15-year-old Gauff will be facing considerably tougher opposition in the form of Naomi Osaka.

Next Sports Burst - Who's to Blame at Manchester United
Read 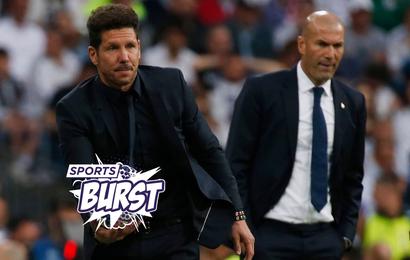