Whilst wheeling in a giant white board and Coach Zizou writing 'Bale Out!' on it in front of the press would be a seen as a little over the top, the Real Madrid manager still gave the clearest indication yet on Sunday that Gareth Bale was done at the Santiago Bernabeu.

Talking after yet another hapless performance that saw the team lose 3-1 to Real Sociedad, the coach was asked why Bale had been left out of a second match day squad in a row.

Coach Zizou confirmed that the Welshman had been fit to play but that "it's very clear what I have done this weekend," and hinted that Bale may already have played his last game for Madrid with no guarantee of featuring in the final match of the season against Betis next Sunday.

Good news for Bale, who now gets to enjoy Tiger Woods at the upcoming PGA Championship uninterrupted by having to play football.

There are three more reasons to believe that Bale is done and dusted at Madrid. The first are the performances and promise of the attack-minded Brahim Diaz and Vinicius Junior as well as Eden Hazard declaring on Sunday that his future intentions have been told to Chelsea with the inference that these involve leaving the aforementioned club.

The Sports Burst live show will be sifting through the tea leaves of this particular affair. Just head to our beIN SPORTS USA Facebook page at 12PM ET / 9AM to join in the fun.

One Premier League club didn't take long to prepare for the new season by firing the coach of the old one. Nope, it wasn't Ole Gunnar Solskjaer being let loose by Manchester United already but Brighton and Hove Albion.

The Seagulls managed to avoid relegation this season but still opted to dismiss the popular Chris Hughton after a run of just three wins in the final 23 games of the season.

A very different scene at Manchester City, Hughton's last opponents in charge of Brighton. The EPL winners flew back to Manchester to kick off a celebration party at the Etihad after prevailing in one of the most remarkable title races in the Premier League's history.

Not so happy days at  Manchester United, the team that needs the biggest overhaul by far in the division and Juventus might be flying in to take Alexis Sanchez off its hands. One bright spark in a Monday of doom for United fans after the team signed off the season with a home defeat to relegated Cardiff.

The Locker Room will wrap up the weekend gone with Kay Murray and the gang at 7:30PM ET / 4:30PM PT.

Monday sees some live-and-kicking football affairs to be taken care off lead by Inter Milan attempting to clinch a top-four spot in Serie A and a Champions League place for Jose Mourinho and Diego Godin to enjoy next season.

Currently, Inter are doing their level best to blow the chance having racked up four draws from the past five league games.

No excuses for the same result on Monday with Inter hosting bottom of the table, Chievo. A win moves Inter into third with a four-point cushion on fifth with two rounds to go. However, as ever, Mauro Icardi's agent and partner, Wanda Nara has been making the headlines by promising that her client will be staying at Inter but did note that the Argentinean and Cristiano Ronaldo could play together.

Over in the Turkish Super Lig and Besiktas still have a teeny, tiny chance of winning the league. Currently in third, Besiktas can move to four points from the top with a victory over Alanyaspor in a match that is live on beIN SPORTS 1PM ET / 10AM PT followed by Malaga against Real Oviedo, a clash between two teams in the Spanish second division looking for a play-off spot.

The best of action and all the day's news will be on the XTRA with Jeremy St. Louis at 7PM ET / 4PM PT. 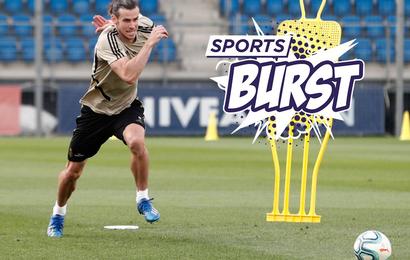