Russia scored an injury-time equalizer to deny England a deserved win in their Euro 2016 opener in Marseille.

Roy Hodgson's side were dominant from start to finish at the Stade Velodrome, but were left to rue a combination of wasteful finishing and Russian resilience as Leonid Slutsky's side somehow escaped with a 1-1 draw.

Eric Dier finally gave England the lead their performance merited with an unstoppable free-kick from just outside the area in the 73rd minute, but Russia kept themselves in the game and stole a point when Denis Glushakov bundled home Vasili Berezutski's looping header at the back post two minutes into stoppage time. 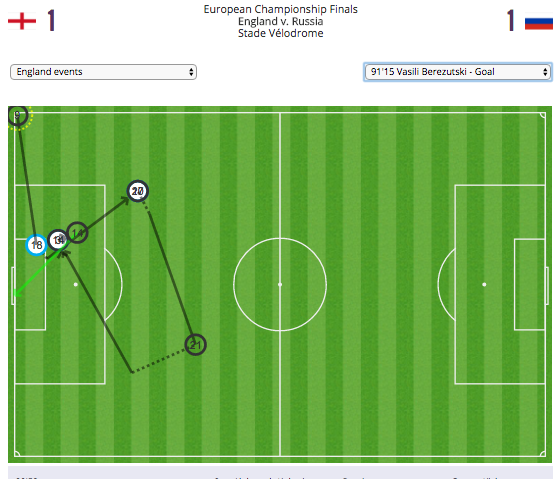 The equalizer also ignited unsavory scenes behind Joe Hart's goal, as fan clashes seen on the streets of Marseille in the days leading up to the game erupted inside the Velodrome.

Russia celebrate the goal that grabbed them a late draw.#ENGRUS #EURO2016 pic.twitter.com/gXpx0wr9U9

Much of the pre-game talk was centred around Hodgson's team selection, and the England boss plumped for a front three of Harry Kane, Raheem Sterling and Adam Lallana, with captain Wayne Rooney deployed in a deeper role.

Hodgson was rewarded with a hugely impressive first-half display, particularly from his skipper, with Russia clinging on in the face of wave after wave of England pressure.

Understandably, England's intensity dropped after the break, but it looked as if Dier's intervention was going to be enough to earn all three points.

But Russia had other ideas, and their late, late leveller means Wales sit top of Group B heading into Thursday's Home Nations clash in Lens after their win over Slovakia earlier in the day.

Xavi: We can still make history in UCL

‘Our goal is to win UCL’ - Ancelotti

'A decisive game' - Pique and Xavi