Pep Guardiola has confirmed that Manchester City defender Eric Garcia is set to join Barcelona at the end of the season.

Garcia developed in Barcelona's academy before joining City in 2017, and has been strongly linked with a return to his boyhood club on a free transfer.

The 20-year-old's contract with City will expire at the end of the current season.

"There are players even who don't play any matches. I think, for example, of Eric Garcia who is one of my favourite players," Guardiola said in his press conference after Sunday's Carabao Cup final win over Tottenham.

"I would love to have 15 Eric Garcias for the way he conducts his behaviour. He is always thinking of the team. He's always a good face in the good or bad moments. He helps the manager and the backroom staff all the time.

"He will go in an incredible team and when the people say they are unsatisfied if I don't play, I think of Eric.

"Most of the time he's not on the bench because he's going to move to Barcelona, I hope so. It's tough, but it is what it is."

After moving from La Masia, Garcia rose quickly through the ranks at City and became one of the club's most promising defensive prospects.

The Spaniard was involved more frequently last term, making 20 appearances in all competitions.

Though Garcia hasn't seen much playing time this season, he made his senior Spain debut in September 2020 and has gone on to earn seven caps for his country. 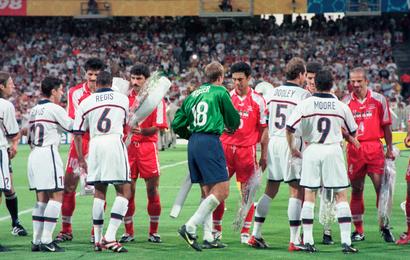