Antoine Griezmann was on target for the fourth successive match as Atletico Madrid secured a 3-0 La Liga victory over Deportivo La Coruna at the Vicente Calderon.

The Frenchman's rich vein of scoring form continued as he added to Saul Niguez's first-half opener with a brilliant cross-goal finish, ensuring Atletico – who added a third through Angel Correa – kept pace with Liga leaders Barcelona, who defeated Getafe 6-0 earlier on Saturday.

Diego Simeone's side dominated the game from the opening exchanges and moved into a first-half lead when Saul exposed some poor defending by arriving into the box late and heading beyond German Lux.

Yannick Ferreira Carrasco was denied by the Argentinian goalkeeper before striking the crossbar early in the second half, when Atletico's superiority really began to show.

Griezmann added a superb finish to Koke's exquisite pass on the hour mark to hand the hosts a comfortable cushion with his 16th Liga strike of the season and he was replaced by Matias Kranevitter shortly after – Simeone keeping the Champions League last-16 second leg against PSV on Tuesday in mind.

Substitue Correa provided some gloss to a 10th straight home triumph over Deportivo – whose winless run now stretches to 13 games – with the final goal, though the gap to Barca is a daunting eight points.

Atletico welcomed Diego Godin back into the line-up after he missed the 3-1 win over Valencia last weekend due to illness, while Carrasco was rewarded for his goal in the match at Mestalla with a place in Simeone's XI.

After a low-key start to proceedings, Jose Maria Gimenez went close to breaking the deadlock when he headed over from Koke's delivery in the 16th minute. 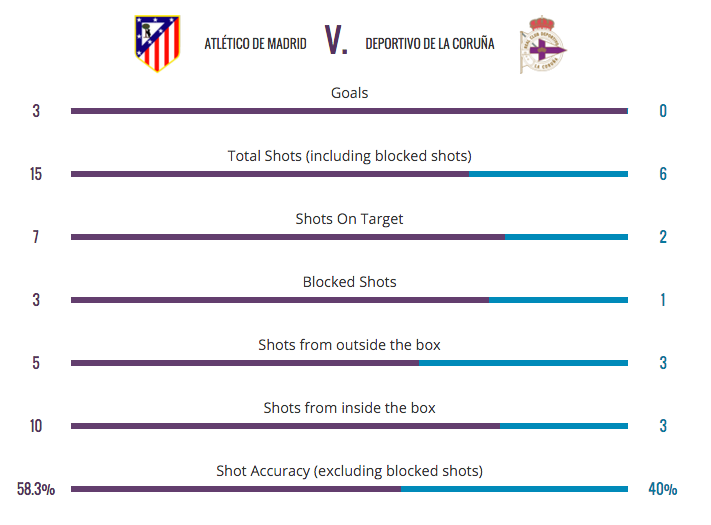 The chance spurred Atletico into life and two minutes later they were ahead.

Saul caught Manuel Pablo off guard, bursting into the box and beating the left-back to Filipe Luis' cross with a powerful header that flew into the back of the net.

Atletico came close to doubling their advantage with 23 minutes played, but Lux produced a great save at his near post to deny Carrasco.

Griezmann was unable to take advantage of a brilliant opportunity to convert when he raced through for a one-on-one on the stroke of half-time, missing the target with the outside of his left foot.

Deportivo continued to come under pressure in the second half, with Atletico controlling possession.

Carrasco produced a brilliant, curling strike from 25 yards that cannoned off the woodwork, before forcing Lux into a save with a low effort from the edge of the area in the 53rd minute.

Atletico's relentless pressure paid dividends seven minutes later, when Koke fed Griezmann on the left-hand side of the box and the Frenchman fired an excellent finish inside the far post.

An important block from Saul stopped Fede Cartabia pulling one back for Deportivo, while Jonathan Rodriguez curled narrowly wide with 69 minutes played.

Correa, who replaced Lucas Vietto in the 58th minute, rounded off the scoring when he latched onto Gabi's long ball and slotted a calm finish beyond Lux seven minutes from time, ensuring his team head into their PSV clash in high spirits.

Canet Retake the Lead Against Marseille