Shkodran Mustafi scored his first international goal and Bastian Schweinsteiger struck late on as world champions Germany opened their Euro 2016 campaign with a 2-0 victory over Ukraine in Lille.

Mustafi, playing at centre-back with Mats Hummels unfit, headed in midway through the opening 45 minutes at the Stade Pierre-Mauroy.

Jerome Boateng cleared a Yevhen Konoplyanka effort off the goal-line before the break as Ukraine enjoyed their best period of the match.

But Joachim Low's men had much more control in the second half, with Toni Kroos hitting the crossbar before substitute Schweinsteiger made the game safe as he netted his first Germany goal in almost five years within three minutes of his introduction. 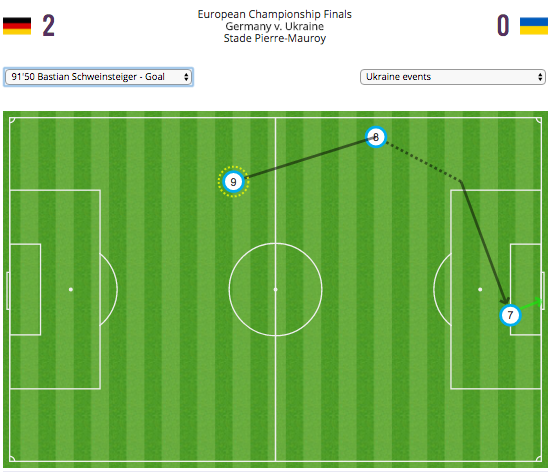 After losing three of their five matches since a shaky qualification campaign, three points on matchday one – even in unspectacular fashion – will come as a relief to Low ahead of their crucial clash with Poland on Thursday.

The pressure is now on Ukraine to pick up a result against Northern Ireland if they are to keep their chances of progression to the last 16 alive.

A lively start to the game saw Konoplyanka's strike pushed away by a diving Manuel Neuer, while Jonas Hector mishit an effort badly from a presentable opening at the other end.

The breakthrough arrived in the 19th minute when Kroos clipped in a free kick from the right and Mustafi timed his run perfectly to thump a header into the top corner.

Neuer had to react quickly to make an impressive save from Yevhen Khacheridi's header from a Konoplyanka corner as Ukraine attempted to respond.

But Germany should have doubled their lead when Andriy Pyatov stood firm to deny Sami Khedira after he had beaten offside trap to surge clear on goal from Kroos' floating pass.

Ukraine rallied again at the end of the first half, with Boateng only just able to make a dramatic clearance off the line at the second attempt after Yarmolenko's cross had found Konoplyanka unmarked at the far post.

Yarmolenko had the ball in the net a few moments later, but only after flag had been raised against Artem Fedetskiy, whose shot had forced Neuer to parry into the Sevilla star's path.

Pyatov saved from Julian Draxler and Khedira early in the second half, before Germany struck the woodwork.

A patient passing move eventually led to an unchallenged Kroos pulling the trigger from 30 yards and his effort rebounded off the crossbar.

Ukraine threatened when Yaroslav Rakitskiy forced Neuer into action with a free-kick from distance just before the hour mark, but Germany largely controlled proceedings after the break.

There was only one late scare when a mix-up between Mustafi and Neuer almost produced what would have been an unlikely equaliser for Ukraine, with the world champions relieved to see the defender's header loop away from goal.

Mesut Ozil wasted one chance to end the game as a contest as he shot straight at Pyatov after another precise Kroos pass, before Schweinsteiger did just that in making a swift impact from the bench in stoppage time.

Having been a doubt to appear at the tournament at all after an injury-interrupted season, Schweinsteiger found the top corner from Ozil's cross to mark his first appearance since March in style.

Next Gianluigi Buffon And Marc Wilmots Shocked At Euro
Read