Leicester City took another giant step towards the Premier League title with a 1-0 victory at Crystal Palace on Saturday.

Claudio Ranieri's side had won three of their last four league matches by a solitary goal and Riyad Mahrez's first-half strike proved enough against a Palace side yet to win in the top flight in 2016.

Leicester were forced to grind out a win against Newcastle United on Monday and the encounter at Selhurst Park was similarly short on quality with both sides wary of being caught out by pacey counter-attacks.

Yannick Bolasie, in particular, proved a handful and only a fine reaction save from Kasper Schmeichel denied him an equaliser after Mahrez had turned in Jamie Vardy's cross 11 minutes before half-time.

Palace enjoyed plenty of possession in the second half but found it hard to create clear-cut chances against a disciplined Leicester side who were happy to play on the break. 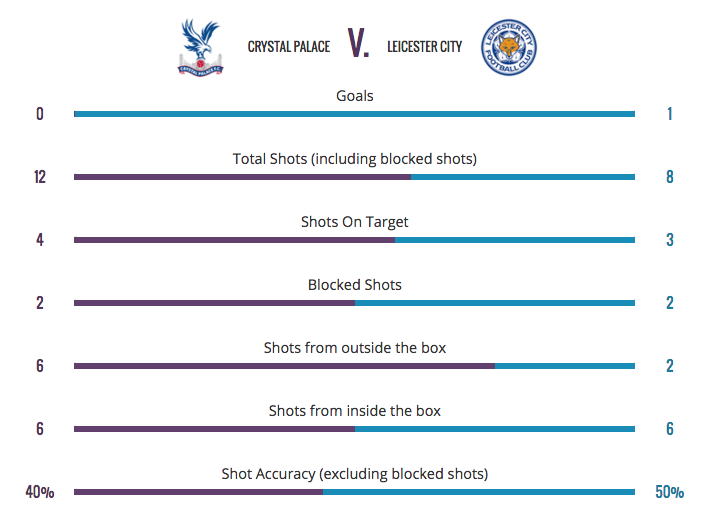 Bakary Sako was denied late on and Damien Delaney struck the bar but Alan Pardew's side ultimately ran out of ideas, as Leicester held on for a win which moves them eight points clear of Tottenham ahead of their meeting with AFC Bournemouth on Sunday.

After a scrappy opening, Mahrez missed a golden chance to grab the lead on 18 minutes when, having been played in behind the Palace defence by Danny Drinkwater, his low shot was partially blocked by Wayne Hennessey before being cleared.

Palace responded with a bright spell of attacking possession, Wilfried Zaha bobbling a volley wide of the far post after being picked out by Bolasie, and the hosts were punished for that miss after 34 minutes.

Vardy turned into space in the area and drilled the ball across the box, and Mahrez arrived to sweep home from close range with Hennessey out of position.

Bolasie almost restored parity within two minutes but Schmeichel reacted well to parry his deflected shot away at the near post.

Pardew introduced Sako and Martin Kelly at half-time to inject some life into Palace but Leicester almost doubled their lead within three minutes of the restart, Shinji Okazaki firing just over on the turn after good work from Marc Albrighton.

Bolasie was proving a real handful as Palace began to pile on the pressure in their search for an equaliser, and Wes Morgan produced one impeccable challenge to deny him a one-on-one following a long clearance forward.

Schmeichel showed safe hands when grasping Sako's bouncing drive from distance and Delaney almost snatched a point when he rattled the crossbar in injury time with a volley from close range, but Palace could not avoid a sixth consecutive league defeat at home.