A listless first-half performance ended any hope of a Barcelona comeback in the Supercopa de Espana, the Catalans falling to a 2-0 second-leg defeat to lose 5-1 on aggregate against Real Madrid.

Marco Asensio wasted no time as he spectacularly fired the home side in front after four minutes on Wednesday, with Madrid dominating a team still adapting to life after Neymar.

Barca found goal-scoring opportunities hard to come by and Karim Benzema outwitted Samuel Umtiti to double Madrid's lead on the night shortly before half-time at the Santiago Bernabeu.

The headlines after the first leg were dominated by Cristiano Ronaldo's dramatic cameo, which culminated in a five-match ban following his petulant shove on the referee, but this was a thoroughly professional job from the European champions

4 - Real Madrid have won four titles in the same year for the second time ever, the first one since 2014. Era. pic.twitter.com/lBaaQunv4D

Barcelona improved after the interval – Lionel Messi and Luis Suarez both hit the woodwork – but their Neymar-less future remains a concerning work in progress for new boss Ernesto Valverde, as the club continue their pursuit of a suitable and - on this evidence - much-needed replacement. Those efforts may take on greater urgency after Suarez appeared to hobble through the closing stages.

With Ronaldo suspended and Gareth Bale and Isco on the bench, Lucas Vazquez and Asensio were selected to flank Benzema in attack, and the latter picked up where he left off at the end of Sunday's first leg.

Having hammered home Madrid's third from the edge of the box at Camp Nou, it took Asensio just four minutes to beat Marc-Andre ter Stegen from even further out in Madrid, firing in a wonderful 25-yard strike that left the German goalkeeper flat-footed.

While Madrid's tweaked attacking trident made a flying start, the missing 'N' in Barcelona's 'MSN' forward line was glaringly obvious after 10 minutes. 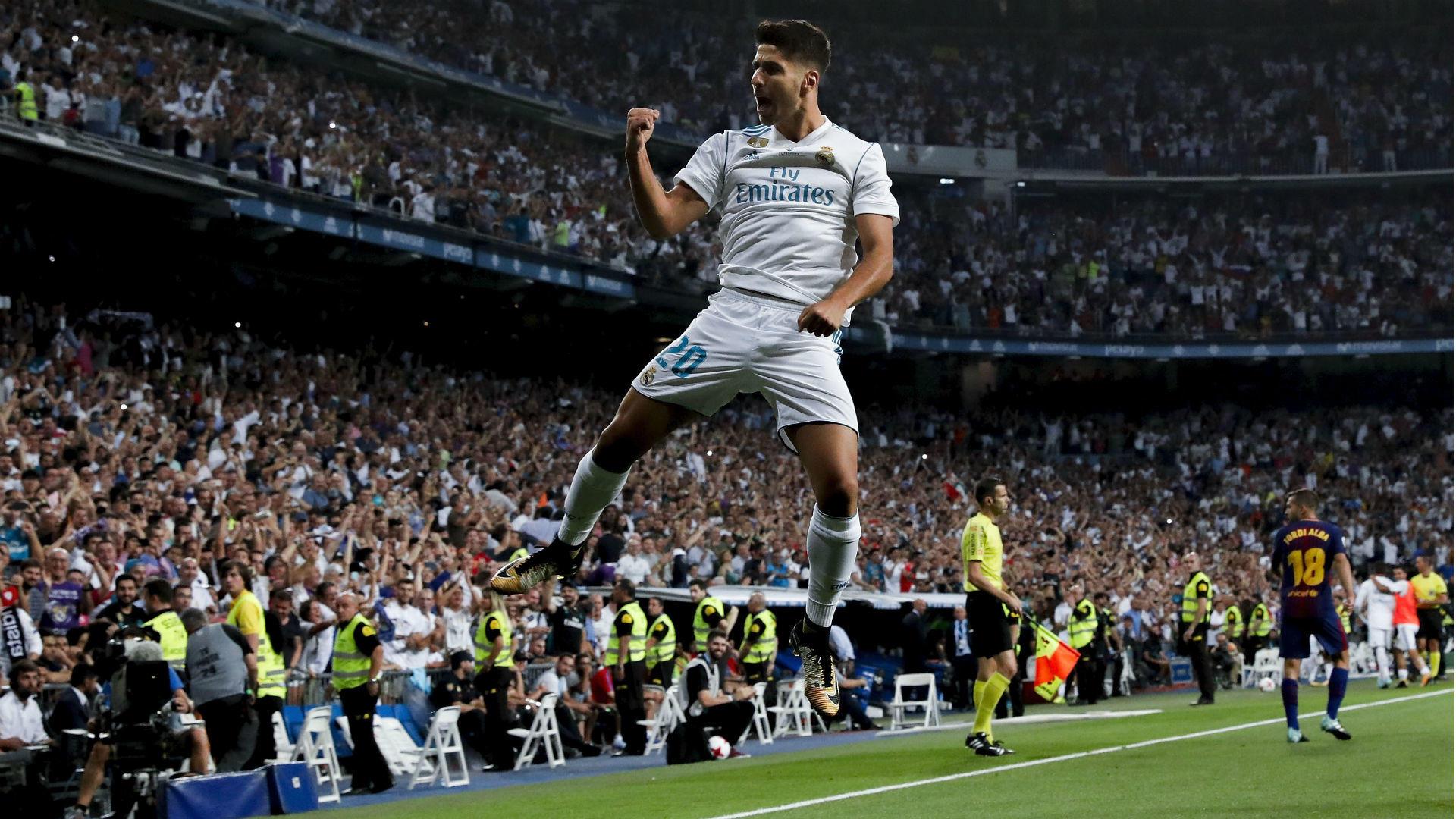 Valverde opted for a new-look 3-5-2 formation and Suarez perhaps forgot he was shorn of an attacking comrade when he squared for nobody in the box.

Keen to match the efforts of his colleague on the opposite flank, Vazquez curled a shot against the inside of the left-hand post shortly after the half-hour mark, as Barca struggled to create chances for Suarez and Messi.

Madrid netted their deserved second seven minutes from the break.

A year to the day since this boy was presented as a Real Madrid player.

Benzema's quick-thinking exposed Umtiti's laboured defending and the striker latched on to a Marcelo ball into the box to smash home from close range.

Keylor Navas – making his 100th Madrid appearance – did not have a save to make in the first half, but he showed good reactions to get down and intercept a Suarez cutback early in the second.

Barca were showing signs of life and Messi saw an effort crash off the underside of the crossbar before Suarez went close with two headers – the second bouncing off the foot of the post after Navas had parried a fierce Messi drive.

But Madrid were comfortable with their four-goal aggregate advantage, and Barca's mini-recovery proved fruitless on a night when they were outplayed by their fiercest rivals for the most part.

Next Real Madrid And The Curse of The Supercopa
Read