Leighton Baines' goal midway through the second half sealed a 2-1 Premier League win for Everton over AFC Bournemouth, easing the pressure on beleaguered manager Roberto Martinez.

Everton took the lead in the seventh minute at Goodison Park on Saturday, Tom Cleverley beating Artur Boruc with a precise strike after neat passing by the hosts, but Bournemouth were swiftly level in controversial circumstances. 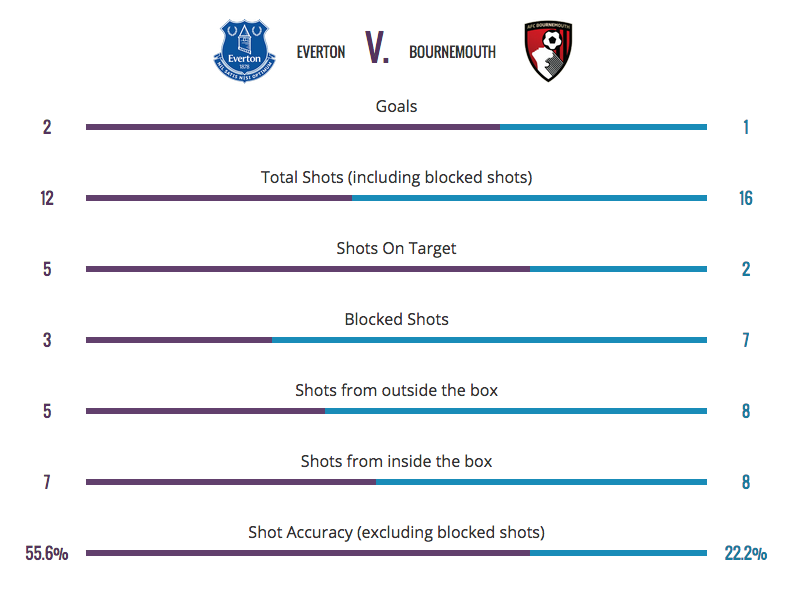 Marc Pugh swept a finish in at the back post, but Everton felt there was a foul by Callum Wilson, making his first start in seven months after a serious knee injury, in the build-up to the goal.

However,  Baines put Everton back in front after 64 minutes, smashing in powerfully after Cleverley touched on an Aaron Lennon cross and Bournemouth could not find another equaliser.

Everton's victory broke a run of seven Premier League games without a win and may afford Martinez some goodwill from those among the Goodison faithful who feel he should be sacked.

The game was preceded by an emotional minute's applause to mark the verdict of the Hillsborough inquests, with families of the victims welcomed on to the pitch as Everton showed solidarity with their neighbours Liverpool.

Cleverley then drove Everton into the lead in the seventh minute, finding Boruc's bottom-left corner from inside the area after a sweet pass by Ross Barkley, who collected his first league assist of 2016.

But the advantage lasted just two minutes, although Everton felt Bournemouth's equaliser should not have stood due to a foul on Premier League debutant Matthew Pennington.

Wilson burst away from the young defender and squared for Joshua King, whose mishit shot fell kindly for Pugh to bundle the ball beyond Tim Howard.

After a handful of wayward efforts from either side, Boruc raced off his line after 36 minutes to deny Barkley, who had been played in by Oumar Niasse on his first Everton start.

As part of supporter protests against the under-fire Martinez, a plane flew over Goodison trailing a banner reading 'Time to go Roberto' shortly before half-time.

Sublime play led to King fizzing a 25-yard drive narrowly wide of the post just before the hour as Bournemouth sought their first ever win against Everton, then Wilson's shot hit the side-netting.

Everton then retook the lead when Baines crashed a finish into the roof of the net from Lennon's low cross to score his first Premier League goal from open play in over three years.

Substitutes Benik Afobe and Junior Stanislas had shots blocked for Bournemouth and Afobe planted a header wide from a great position after 77 minutes as the visitors pressed, but Everton held on for just their fifth home league victory of the season.