Le Graet and Les Bleus coach Didier Deschamps met on Wednesday to discuss Benzema's participation in the tournament, with an official ruling expected later today. However, the Real Madrid striker pre-empted that announcement by tweeting he will not be considered for selection by the hosts.

The former Lyon man was suspended by the FFF in December pending the outcome of a legal investigation into an alleged plot to blackmail fellow international Mathieu Valbuena.

Benzema has been charged with complicity in an attempt to blackmail and participating in a criminal conspiracy as part of a sex-tape plot involving Valbuena, which he denies.

In March, it looked as though the 28-year-old was a step closer to a return to the France set-up when an order preventing him from meeting his international team-mate was lifted on appeal.

However, the former Lyon striker stated he will not be considered for selection after all.

"Sadly for me and for all who have backed and supported me, I will not be selected for the Euros in France," Benzema posted on his official Twitter account.

Despite the ongoing controversy, Benzema has scored 25 goals in 29 appearances in all competitions for Madrid this season.

The 28-year-old's last appearance for France came in the 4-0 friendly victory over Armenia in October of last year, a match in which he scored twice.

A potential return in the friendly matches against Netherlands and Russia last month was scuppered by a hamstring injury. But Benzema is set to remain outside the squad when France get Euro 2016 underway with the Group A clash against Romania at the Stade de France on June 10. 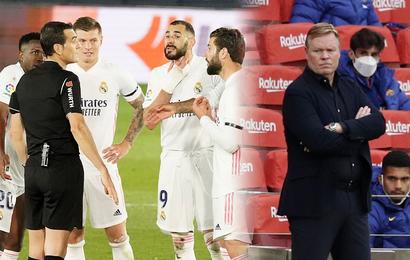