CONCACAF announced the procedures for the confederation's upcoming Nations League on Wednesday, with the new competition set to begin in 2019.

The league will take place in September, October and November of 2019 with a championship for the top league being played in March 2020 to declare the champion of the Nations League. There will, however, be a one-off qualification phase this year to determine which of the three tiers each nation will be placed in.

The countries that made the Hex, CONCACAF's final round of World Cup qualification, in the previous cycle will automatically be placed in the top tier. That means Mexico, the United States, Costa Rica, Panama, Honduras and Trinidad and Tobago will be able to play friendly matches in the late 2018 and early 2019 international windows.

Matchups have been set for the Concacaf Nations League Qualifying Phase, kicking off this September

Nations League qualification also will serve as Gold Cup qualification. The six Hex teams are automatically qualified for the continental championship, newly expanded to be a 16-team tournament.

The four last-placed finishers in League B, which will be made up of four groups of four teams, will fall to League C. League C is made up of three groups of three and one group of four with the group winners of that League also promoted to the next league.

#LoveForOurGame, Unity / Football / Quality / Access and a dynamic visual system for the 21st century. Our @CONCACAF brand has been reset to drive forward the future of our Confederation and the exciting growth of football across our region. pic.twitter.com/4ZEgWbf8As

The confederation also revealed a new logo and branding identity.

The draw for CONCACAF Nations League qualification was carried out with teams placed into a computer-organized master schedule. How teams perform over these four matchdays will be put into a master table with nations sorted into their leagues from there. The full schedule will be posted on the official CONCACAF website, though the photo below lays it out in grid form.

Next Basel Win The Day, But Manchester City Advance
Read 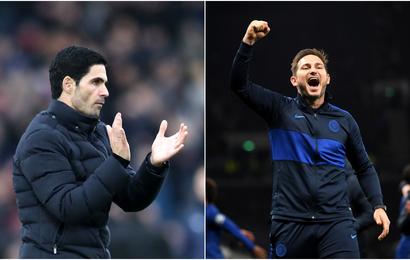