Lautaro Martinez sees winning the Scudetto as vindication for his decision to stay at Inter, where he has formed a superb partnership with fellow forward Romelu Lukaku.

Martinez was heavily linked with a move to Barcelona throughout the 2019-20 season, with the player even discussing a possible switch to Camp Nou with fellow Argentine Lionel Messi.

However, the 23-year-old instead opted to stick around at San Siro, remaining a key part of Antonio Conte's squad as the Nerazzurri secured a first Serie A title since 2010.

Inter had finished second in the previous season but have kicked on after that disappointment, running away from their rivals since the turn of the year to be crowned champions and end Juventus' nine-year dominance in the competition.

"I am very happy to be at Inter, even more so after this Scudetto which has been missing for so many years," Martinez said in an interview with Sky Sport Italia.

"We are experiencing an incredible moment and I cannot think of anything other than being here.

"I was close to Barcelona, I had also spoken with Messi. Afterwards, I made a choice - I chose to stay here and I was not wrong."

Martinez's combination with Lukaku has been a key factor for Inter, the pair scoring 75 league goals between them in their two seasons together at the club.

Lukaku has been a revelation since joining from Manchester United. After 23 goals in his debut Serie A campaign, he is at 22 this time around with two games to play, as well as providing 11 assists.

The Belgian striker has been ruthless too, converting 52.8 per cent of what Opta describes as 'big' chances, which is where a player is expected to score.

Martinez – who has 16 goals and five assists in the league in 2020-21 – believes the dynamic duo have continually pushed each other to raise the bar under Conte, in part due to the competition provided by having the experienced Alexis Sanchez in the squad.

"We built our relationship from the first day he arrived," Martinez said of Lukaku.

"The year before he had watched Inter's matches and we talked about this for two or three hours after the first training session. He speaks Spanish, we understood each other immediately.

"I always tell him that there is a match between the three of us, because every training session we try to improve and give our best.

"Each one has taken a step forward this year and this is important for the growth of Inter and this group." 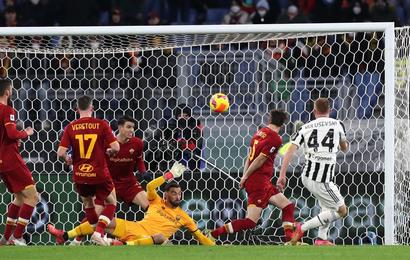