Antoine Griezmann's decision to turn down a move to Barcelona last year "hurt" the club, according to Xavi.

Griezmann was strongly linked with signing for Barca after the 2017-18 season but he eventually announced in a televised documentary he would stay at Atletico Madrid.

However, after Barca held off Atleti to defend their LaLiga crown, France forward Griezmann confirmed his intention to leave the Madrid club after five years.

Barca are reportedly again front-runners for his signature, though head coach Ernesto Valverde has refused to discuss how Griezmann could fit into a forward line with Lionel Messi and Luis Suarez.

And Xavi, who won eight LaLiga titles at Barca and made his last professional appearance for Al-Sadd before hanging up his boots this week, hinted there may be leftover bad feeling at Camp Nou over Griezmann's previous rejection of a move.

"I understand it hurt what he did last summer," Xavi said to Sport. "If the reason for the rejection [from Barca players] was only a footballing issue, I'd speak with the dressing room to make them see he's a player who can bring something.

"We have to see, however, who is signing him? The sporting director? Valverde? The president? If I came to Barca I would ask for the signings, and if the dressing room doesn't agree with any of them I'd speak with them, but in the end I decide. Be it Griezmann or whoever.

"Another thing would be if the coach doesn't want him either. Then we have a problem."

Barca have given Valverde their backing despite their latest Champions League disappointment, with Xavi making his ambitions to coach at Camp Nou clear.

"If one day I come back to Barcelona it's all a consequence of knowing that I will be judged," he added.

"Everyone wants to be at a big team. It would be more comfortable to go to a second division club but I'm competitive and I like big challenges.

"I know what will come, I will go bald or my hair will turn white, but it is what it is."

Messi made it clear the Champions League was Barca's top priority in 2018-19 but he was unable to add to the four European titles he has won at the club.

"That's more than a few, we only had one before," Messi's former team-mate Xavi said. "We were able to win more but it's hard to win the Champions League.

"[Pep] Guardiola's Barca were better than the rest of the teams and we only won two of four. Chelsea and Inter knocked us out. But be calm, Messi's not finished yet.

"We always talk about the post-Messi era, but Leo has three or four good years left. At the top level, like now, because he looks after himself, he's incredibly professional, he's physically strong, a beast mentally. He's the number one at everything." 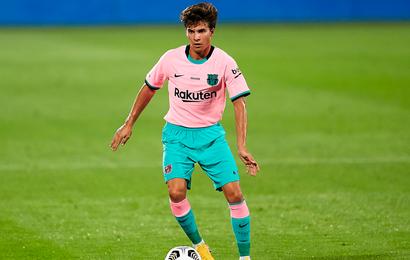 Rennes Come Back For Stoppage-Time Win Over Monaco

Maxi Gomez Gets Equalizer For Valencia