The Estadio Benito Villamarín, Seville - It’s the last day of the 2015-16 season and Getafe need a win to guarantee survival in the Spanish top-flight. Real Betis, already safe and comfortably midtable, aren’t playing ball – that is to say, Real Betis are playing ball.

The hosts take a 2-0 lead before Getafe’s Emi Buendia receives his marching orders for a nasty challenge on Dani Ceballos and, despite a consolation piledriver from Alvaro Medran in 84’ - the last goal of the season - Los Azulones’ fate is sealed: a 12-year run in LaLiga is done, over, kaput.

No one is going to miss them.

And no one expects to see them back any time soon.

The municipal city of Getafe sits nine miles south of the epicenter of the Spanish capital.

Given its proximity to one of Europe’s most bustling cities, though, the term satellite town is a more accurate way of describing how Getafe is viewed within the Comunidad de Madrid – a metropolitan area called home by roughly 6.6 million people; Getafe is home to less than 200,000 of them.

Unlike other modestly-sized towns with teams in Spain’s top division, like Villarreal or Eibar, Getafe C.F. has never had a monopoly over the locals’ footballing affections.

There are a number of contributing factors to the club’s struggles in trying to grow a fanbase, but by far the biggest is having Real Madrid, and to a lesser extent Atletico Madrid, within driving distance. Walk through the streets of Getafe and you are more likely to spot a Sergio Ramos replica jersey than a Jorge Molina one.

Excessively high ticket prices have also played a role in the Coliseum Alfonso Pérez’s failure to attract bums to its 17,939 seats. For the three seasons leading up to relegation, 7,688 was the average attendance for a Getafe home game.

President Ángel Torres has come under criticism over the years for his unwillingness to make tickets more affordable, but has persisted with his pricing model nonetheless.

I bought tickets for Getafe B vs Rayo Majadahonda and Spain vs Germany. The Spain tickets were cheaper. 🤷♂️

But none of that is to say Geta are content to be LaLiga's least loved team.

In the competitive landscape of elite soccer clubs trying to outdo one and other on social and traditional media, Getafe have never been too proud to avoid using gimmicks to generate a bit of buzz.

In one effort to increase support, the club launched an X-rated campaign encouraging fans to donate sperm, and thus spawn a new generation of Getafe fans. They even made a 70’s style movie, “Hot Zombies of Getafe”, to *ahem* assist any fans willing to do their part for the noble cause.

As part of a sponsorship deal with Burger King, the kit design for the 2009-10 season included an unnerving imprint of the food chain’s grinning mascot on the inside of the jersey, to be used as a mask for any would-be goalscorers looking to imitate the goal celebration made famous by Fabrizio Ravanelli. 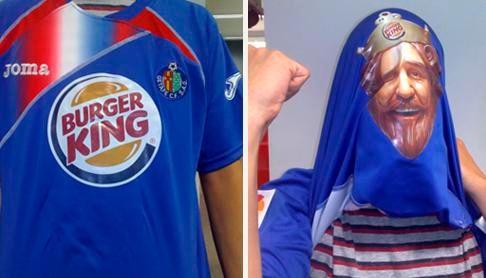 Also sitting on the ‘iffy’ end of the spectrum of PR stunts was the unveiling of an unlikely new mascot ahead of the 2010-11 season: a world-weary, suicidal koala bear.

Apparently, the piano-playing herbivore was supposed to tap into the part of the viewer’s brain that triggers a desire to buy tickets to watch a middling soccer team.

Oh, to have been in the committee meeting when this idea was floated.

Things looked grim when Getafe went down to La Segunda.

After failing to keep the team in LaLiga, manager Fran Éscriba got the boot, and his successor, Juan Eduardo Esnáider, was given the heave-ho just seven games into his tenure with the club on the wrong side of the drop zone.

Then stepped in José Bordalás.

Half man, half force of nature, Bordalás turned Getafe’s fortunes around, 180, taking the team to a third-place finish, and subsequently back to the promised land of LaLiga with wins over Huesca and Tenerife in the promotion playoffs.

The team no one expected to see back in LaLiga any time soon had returned at the first time of asking. And, as their eighth place finish in 2017-18 indicated that they had not come back to merely make up the numbers. The next season they finished fifth, only missing out on a Champions League spot by two points.

This season, as of writing, Getafe are holding steady in third; a feat made all the more impressive by the added strain of juggling their domestic duties with playing in the Europa League. This despite the team subsisting on LaLiga’s 15th smallest transfer budget – Getafe have spent 20 million euro this season.

Oh, and speaking about the Europa League, Getafe have a 2-0 upper hand over Ajax going into the second leg of the round of 16.

A taskmaster who reportedly forbids his players from walking during practice, Bordalás has made his paltry budget stretch to the nth degree with excellent recruitment. Getafe avoid signing super stars and instead focus on bringing in undervalued and underappreciated players with a point to prove.

Nemanja Maksimovic, a fringe player at Valencia, now a regular starter alongside Mauro Arambarri, a former under-the-radar prospect at Bordeaux; Allan Nyom, a 3 million pickup from West Brom, flanking the highly-touted Togolese center-back Djené who was picked up for a bargain from Belgium’s Jupiler Pro League; and Ángel Rodriguez, a journeyman striker who had never played in LaLiga before 2017-18 and was recently linked with a move to Barcelona.

While the team is built on a foundation of defensive solidity, Getafe are more dynamic and adaptable than they are usually given credit for – some reputations can be hard to shake.

Unlike the unashamedly two-blocks-of-four defensive style deployed by Diego Simeone, when Getafe lose possession Bordalás is less risk averse than his Atleti counterpart – the coach he is compared with most often - and is happy to commit midfielders forward to press opponents in their own half and force turnovers.

And although Getafe have some of the lowest possession statistics in LaLiga, this is not by design – in an interview with El País, Bordalás admitted not all of his players have the necessary talent to outpass other sides.

The team make up for this deficiency in other areas – Getafe are among the greatest current proponents of the counter-attack, a tactic that was recently deployed to perfection by Damián Suárez, the only remaining member of the Getafe side that was relegated, in a 2-0 win at San Mamés.

Whatever the tactics, Los Azulones are now a legitimately entertaining team to watch.

The club sold a record 13,000 season tickets during the offseason, and everything indicates that demand will increase even further this summer.

Gone are the gimmicks. Now Getafe is making a name for itself the old-fashioned way: by being good at soccer.