Ronald Koeman insists the match in LaLiga between Barcelona and Deportivo Alaves is more important to him than discussing Paris Saint-Germain or Neymar.

A huge Champions League last-16 tie between Barca and PSG begins at Camp Nou on Tuesday and Neymar has been ruled out against his former club through injury.

But Barca boss Koeman stressed the home Alaves match on Saturday was most important to him because it is what comes next.

He also suggested he was considering squad rotation but would not make significant changes prior to the PSG game because he lacks options.

Barca lost 2-0 to Sevilla last time out on Wednesday in the first leg of their Copa del Rey semi-final tie. It was their first defeat inside 90 minutes in 17 matches across all competitions.

But they have won seven and drawn one of their last eight LaLiga games with Alaves.

"I don't think Neymar is an Alaves player," Koeman said when asked about the injury to the PSG forward.

"Saturday's game is more important than Tuesday's. We are going game by game and we want to continue our good streak.

"The result of the Sevilla game is there but we played a very good game. If we repeat the game, we do not lose.

"We dominated in many areas against Sevilla, but you also have to have a bit of luck. We need freshness, but the team is feeling very well.

"You don't play a second half like we did in Seville if the team is not physically well."

Defenders Gerard Pique and Ronald Araujo are unlikely to be risked against Alaves.

Koeman added: "Sergino Dest, Miralem Pjanic and Martin Braithwaite have done something [in training on Friday].

"[On Saturday] there is training and we will decide if they are on the squad list.

"For Araujo or Pique, I always believe in the margin of a risk. The objective is to recover players until the end of the season.

"If it is the last game of the season, you can risk more, but I am not in favour of risking a lot for a game.

"Those players have to recover well and step by step. If they are there and they can play, even better."

On the prospect of rotation, he continued: "Of course there are players who have been playing for many minutes with us not having everyone available.

"You have to think about giving rest to those players to be well in the next game. [But] not many [will be rotated], because there is not much we can change either.

"We look at the players, we train and we will decide. By winning the game, you are always mentally less tired than when you don't win.

"The goal is to win. But first you have to play and it will be difficult."

The Alaves match will start a run of four consecutive home games and Koeman added: "It's good to have back-to-back games at home because you save yourself traveling.

"We can rest more now and hopefully we will get players back to start having a very competitive squad again.

"It is good to see the youth team players and the youngsters play, but we need our more competitive players back."

Lionel Messi has scored 10 goals against Alaves in LaLiga in as many appearances against them, including four in his last three.

If he plays against Alaves, he will equal the record held by Xavi for most Barca league appearances by playing in his 504th top-flight match. 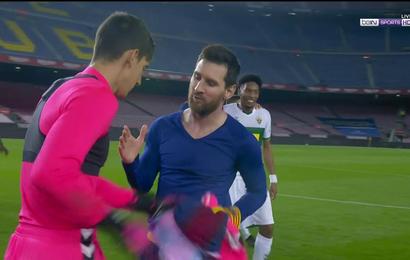