Edinson Cavani's double earned Uruguay a 2-1 win over Portugal and a World Cup quarter-final against France, with a tearful Cristiano Ronaldo knocked out on the same day as his rival Lionel Messi.

Argentina's hopes of going one step better than a narrow defeat to Germany in the 2014 final were ended by a 4-3 loss to Les Bleus, with Ronaldo quickly following Messi out of the tournament.

0 - Neither Cristiano Ronaldo or Lionel Messi have scored a goal in a World Cup knockout match:

Cavani struck in the seventh minute of Saturday's last-16 tie in Sochi to put Uruguay in control, but Portugal hit back after the interval when Pepe headed home Raphael Guerreiro's cross.

However, Uruguay soon led again when Cavani curled in a peach of a finish, though his delight soon turned to pain when the striker limped off after appearing to pull a muscle. 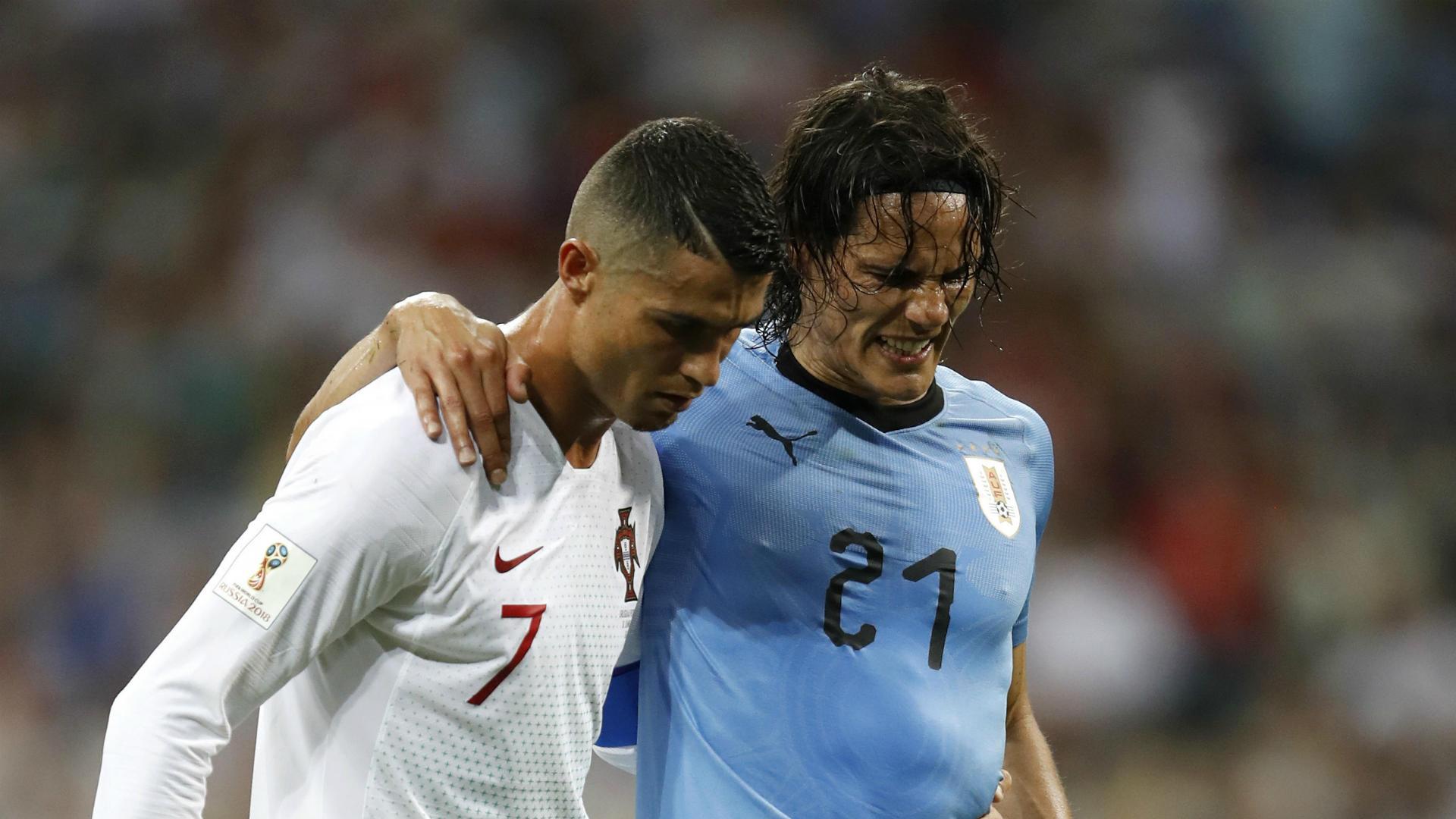 Portugal pressed in search of a second equaliser but Bernardo Silva missed their best chance to level, screwing off-target when faced with an open goal after Fernando Muslera dropped a cross into his path.

Oscar Tabarez's men can now look forward to facing France in Nizhny Novgorod, with Ronaldo and Portugal unable to follow up their surprise success at Euro 2016 two years ago.

Uruguay's previous five goals at Russia 2018 all came from set-pieces but they opened the scoring in the seventh minute with a goal of the highest quality.

Cavani switched play from right to left with a sweeping pass out to Suarez, who teased his man before delivering a wonderful cross his strike partner crashed home at the back post.

Suarez finds Cavani at the back post to put Uruguay up 1-0 early in the game! pic.twitter.com/BUlHpqWSI0

Replays, however, indicated Cavani did not make a clean contact with the finish, appearing to propel the ball over the line via his face, rather than with his forehead as intended.

Suarez was close to adding a second with a 21st-minute free-kick but Rui Patricio was alert to beat away the low strike, before Ronaldo hit the wall with a set-piece opportunity at the other end.

Uruguay had not conceded in any of their six matches in 2018 but nearly 10 hours of resistance came to an end courtesy of a simple set-piece move in the 55th minute.

A short corner was worked to Guerreiro and Uruguay did not respond to the threat, the left-back delivering a superb cross that defender Pepe finished brilliantly with a downward header.

The defender finds himself free in the box and heads it home to make it 1-1 with over 30 minutes left to play. pic.twitter.com/oJbXZKuKwT

Parity was short-lived, though, as Uruguay reclaimed the lead just seven minutes later.

Rodrigo Bentancur collected the ball around 30 yards out and slipped the perfect pass out to Cavani on the left side of the penalty area, allowing Paris Saint-Germain's record scorer to curl a gorgeous first-time strike across Wolves' new signing Patricio.

Cavani one-times a curler into the back of the net to re-take the lead for Uruguay. pic.twitter.com/JZhmTqE1s4

Bernardo Silva ought to have scored a second Portugal equaliser but blazed off-target with the goal gaping after Muslera’s mistake, with Cavani seeming to pick up an injury in the scramble.

Fernando Santos threw on Andre Silva as Portugal tried to find a way through, but defensive duo Diego Godin and Jose Gimenez held a frustrated Ronaldo at bay, the Portugal captain picking up a late booking for dissent as his emotions ran overboard in the closing stages.

Atletico Madrid pair Godin and Gimenez will now do battle against club colleague Antoine Griezmann in Friday's quarter-final against France.

Next Ronaldo Follows Messi Out Of Russia As Portugal Hi
Read

Infantino: Our mission is to make football global

Qatar 2022: A view into the Al Thumama stadium

Ronaldo: Messi, CR7, Would Back WC Every Two Years