Memphis Depay scored one and created another in his latest dominant display as the Netherlands defeated Georgia 3-0 on Sunday ahead of Euro 2020.

Lyon striker Depay had scored both goals in the prior friendly against Scotland to rescue a draw and played a key role again a week out from the Oranje's tournament opener at home to Ukraine.

The first from Depay came from the penalty spot after 10 minutes and he then teased a gorgeous pass through for Wout Weghorst's first international goal in the second half. Ryan Gravenberch later broke his own duck.

Depay and Weghorst again headlined a Frank de Boer XI that showed only two changes from the team that faced Scotland, hinting at his finals line-up, but Matthijs de Ligt was one of those to make way due to a groin complaint.

He was a miss in the defence as Saba Lobzhanidze advanced inside two minutes and squandered a big chance with a tame finish.

The Netherlands would not be as wasteful when they forged a similarly straightforward path through the Georgia back line and Depay converted the penalty won from his pass by Denzel Dumfries, who was tripped by Lasha Dvali.

Dumfries and Depay soon combined again, but the latter's stretching effort was superbly saved by Giorgi Loria, a stop that should have allowed the visitors to equalise when Valeriane Gvilia instead steered wide.

Loria was at his best again to touch over Frenkie de Jong's drive, yet Weghorst's close-range strike escaped his clutches 10 minutes into the second half.

Although more agile goalkeeping kept out Depay's blast, pressure continued to build on Loria's goal and he blocked again from the same man only to see Gravenberch nod in.

A sensational Jambul Jigauri volley beat Maarten Stekelenburg five minutes from time but bounced away off the crossbar, ensuring a one-sided final scoreline.

What does it mean? Steady stuff from De Boer's men

De Boer clearly has a settled side, which might give the Netherlands an edge over some opponents, but they will have to beat better teams than Georgia to become champions of Europe.

This was not the most convincing display, although there could have been more home goals if not for some excellent work from Loria, who prevented 1.19 goals using expected goals on target data.

Depay was involved in a goal every 38 minutes in qualifying (six goals and seven assists in 495 minutes), the best rate among the 54 players to have a hand in five or more. A goal and an assist in 90 minutes meant he was only marginally less effective on Sunday.

With the defence looking a little shaky and Weghorst still making his way on the international stage, the Netherlands' campaign will live or die by Depay's performances.

It was no surprise to see Daley Blind removed in De Boer's only half-time change, having replaced De Ligt in the line-up. The Ajax defender was preferred to Nathan Ake, the substitute that took his place.

Blind failed to complete a tackle or interception as he was exposed by the pace of Lobzhanidze. Euros opponents will be more clinical if Blind has to step in again for De Ligt.

All eyes now are on the Euros, which begins for the Netherlands against Ukraine in Amsterdam next Sunday. 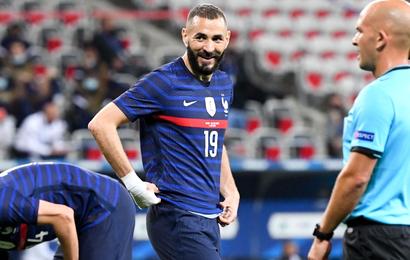