Harry Kane scored a perfect hat-trick as England moved within one point of qualification for the 2022 World Cup after a ruthless first-half performance saw them win 5-0 against Albania at Wembley Stadium on Friday.

Kane's treble and goals from Harry Maguire and Jordan Henderson - all in the first 45 minutes - sealed a comfortable win for the Three Lions, leaving them needing only to avoid defeat in San Marino on Monday in their final game in Group I to book their place at Qatar 2022.

The visitors were all over the place defensively, looking a shadow of the team that had won three of their previous four away games in the group.

England slowed things down in the second half with the game already well won and Gareth Southgate was even able to rest Kane for the final 30 minutes ahead of the trip to San Marino.

The hosts took the lead in the ninth minute when a superb free-kick from Reece James found an unmarked Maguire at the back post and the Manchester United man thundered his header past Thomas Strakosha.

Myrto Uzuni had a glorious chance to equalize five minutes later when Kyle Walker played a loose pass back to Jordan Pickford, but England's goalkeeper denied him.

It was 2-0 in the 18th minute, Henderson playing a one-two with Phil Foden on the right before lifting in a delicate cross to give Kane a simple header.

Henderson then got in on the act himself as he played another one-two, this time with Kane, and the Liverpool captain finished it off himself with his left foot to make it 3-0 before the half-hour mark.

Kane got his second and England's fourth in the 34th minute by firing past Strakosha with his left foot after being played in by Raheem Sterling. It was the England skipper's 38th competitive goal for England, beating the record set by Wayne Rooney.

The Tottenham man then completed his perfect hat-trick in first-half stoppage time when he executed a sublime scissor kick with his right foot from a Foden corner to make it 5-0 before the break.

The second half was a much quieter affair, though Southgate was able to give a senior international debut to Arsenal youngster Emile Smith Rowe, who replaced Raheem Sterling with 15 minutes remaining.

What does it mean? Southgate continues to impress

This game was Gareth Southgate's 67th in charge of England, the joint-most of any England manager since Sir Bobby Robson left in 1990, and equalling Sven-Goran Eriksson's tally between 2001 and 2006.

Southgate has won more games (43) than Eriksson could (40) and his latest victory was never in doubt here.

A single point in San Marino will see England qualify for Qatar 2022, and ensure that the Three Lions have progressed to every major tournament since Euro 2008.

Defense is the best form of attack for England

Southgate has often been criticized for his team selections being on the cautious side, and he went into this one with five defenders and two defensive-minded midfielders in his starting XI.

His team then proceeded to tear Albania to shreds in the first half, having 71 percent of the ball, taking 11 shots and banging in five goals.

Albania have had a good qualifying campaign, winning five of their previous eight games heading into this.

They always looked to be on a hiding to nothing against a determined England though and did not help themselves by picking up three bookings in the first 25 minutes, making looking after Sterling, Foden and Kane all the trickier.

Edoardo Reja's team were either too strong or too weak in the tackle, only winning 36.9 percent of their duels.

England travel to San Marino while Albania host Andorra in the final round of UEFA World Cup qualifiers in Group I on Monday. 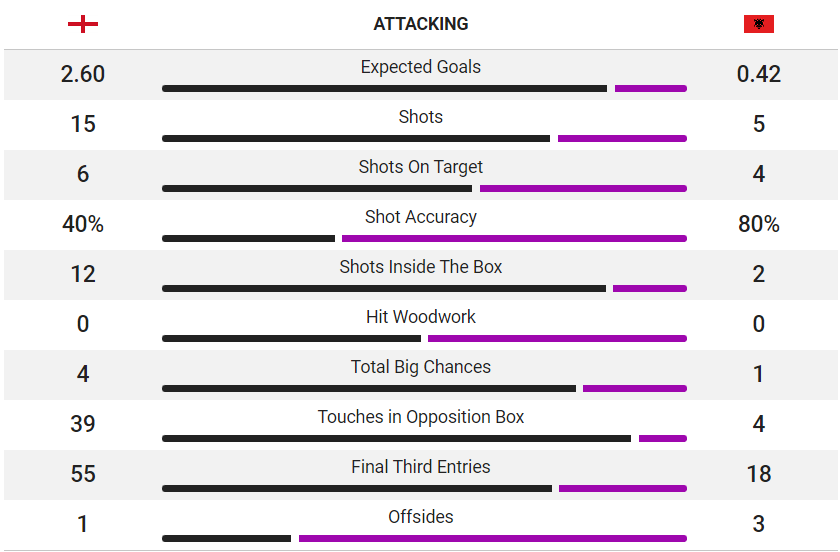 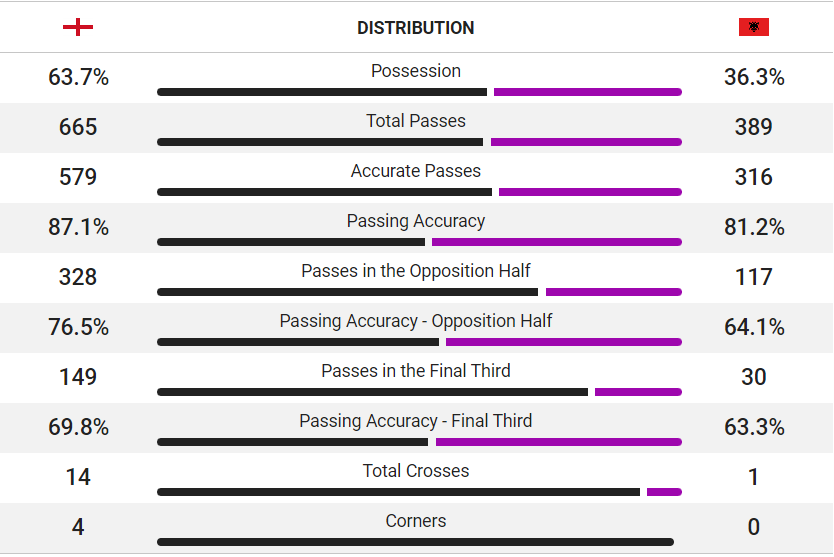