The final Copa Libertadores group stage spots for 2019 have been filled. Palestino, Atlético Mineiro, FBC Melgar and Club Libertad have made it through qualifying stages. For their sake, let’s hope they had time to catch their breath because group stage matches are merely hours away.

From here on out, both the risks and rewards are real. One of the 32 teams in the tournament will lift the trophy at the end of the 2019 final and be etched eternally in CONMEBOL history.

The wait is nearly over! Tomorrow the #CONMEBOLLibertadores Group Stage gets rolling, kicking off a week packed with 16 matches!

🤔 Which matches catch your eye this opening week? pic.twitter.com/7RzJ428gF7

Some players will be looking to make a name for themselves, while others might be trying to repay their boyhood clubs toward the twilight of their careers. Regardless of the situation, one thing is true: blood, sweat and tears will be sacrificed for South America's most prestigious title.

Whether you're a longtime Libertadores fan or new to the excitement, here are five matches to watch for the first week of Copa Libertadores group stage:

Flamengo made an admirable run for the Brazilian Serie A title in 2018 and despite a runner-up finish, the club from Rio de Janeiro is among the favorites for the title this year.

Flamengo have managed to pull off a rare feat in the modern era of Brazilian soccer. The club has kept the majority of its key players from last season while making key signings in the off-season. Olympic gold medalist Rodrigo Caio, former Inter forward Gabriel “Gabigol” Barbosa and Uruguayan midfielder Giorgian de Arrascaeta are expected to become key figures in Flamengo’s 2019 roster.

Home side San Jose will look to pull off an upset and start its group stage campaign off on the right foot.

Nothing about last year’s Copa Libertadores final went Boca Juniors’ way. Starting Tuesday, the club from Buenos Aires will be on a mission to right the wrongs of the 2018 final. The frontline for Boca has remained relatively intact and the Argentinian side has managed to retain young star Cristian Pavon.

One of the more curious aspects of this matchup, however, has nothing to do with Boca Juniors. Jorge Wilstermann’s stadium in Cochabamba, Bolivia is not an easy place to play for visiting teams. The Felix Capriles Stadium stands at about 3,600 meters above sea level, making it one of the highest professional stadiums in the world.

That home field advantage will be a serious ace up Jorge Wilstermann’s sleeve all tournament long. Can they use it to spring an upset on last year’s finalists in the group opener?

Alianza Lima (PER) vs. River Plate (ARG) – Group A

The defending Peruvian champion, Alianza Lima will play host to the defending Copa Libertadores Champion, River Plate, in a Group A opener that promises to be must-see TV.

River Plate have experienced South American glory and are back for more. The Argentinian side – now four-time Libertadores champions – has maintained its youthful and talented midfield from last season, comprised of Enzo Perez, Ezequiel Palacios and Juan Quintero. Argentina International goalkeeper, Franco Armani is back between the pipes as well.

In a Group that is filled with strong teams, dropping points right out of the gate could be costly for either side.

This game brings us ‘Argentina vs. Brazil: Part Two’ of the 2019 Libertadores. Part One having come, of course, in the form of Talleres Cordoba defeating Sao Paulo in the qualifying phase and thereby eliminating the famous Brazilian side from the competition.

Gremio are among the favorites to win not just this title but the Brazilian Championship as well. From Pedro Geromel in the back line, to Luan and Everton up front, team from Porto Alegre is loaded with talent. Gremio have recently made an interesting signing in the form of Diego Tardelli, a forward who was part of Atletico Mineiro’s Copa Libertadores title run in 2013.

The defending Brazilian champions begin their Libertadores campaign in Barranquilla, Colombia. Palmeiras has a deep roster, a quality any title-chasing team will need in this grueling, marathon of a tournament.

Palmeiras has a balance of youth and experience, talent and discipline, tactics and ‘joga bonito’. The infamous Luiz Felipe Scolari will look to lead the team from Sao Paulo to the promise land. Keep an eye on Dudu. He is a crafty player who will be orchestrating Palmeiras’ midfield and haunting opposing defenders with technique, speed and resourcefulness.

See the complete beIN SPORTS schedule for English, Spanish, and Connect with our TV Guide here.

Next Five Brazilians to Watch in the Copa Libertadores
Read 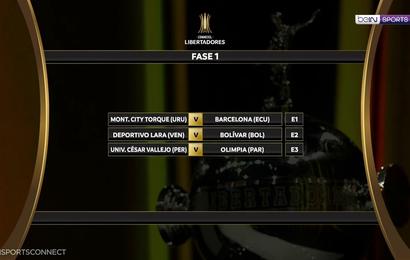