Martin Odegaard gave his parent club a telling reminder of his talents as Real Sociedad stunned Real Madrid with a 4-3 victory in the Copa del Rey quarter-finals.

The 21-year-old playmaker opened the scoring midway through the first half at the Santiago Bernabeu, assisted by a dreadful goalkeeping error from Alphonse Areola.

That was Odegaard's sixth goal in the first season of a planned two-campaign loan stint in San Sebastian and Sociedad striker Alexander Isak then took centre stage with two goals in as many second-half minutes.

Alexander Isak's goal was ruled out, but he responded with this brilliant volley! Real Sociedad now lead Real Madrid 4-1 😱

Mikel Merino made it 4-1 after Marcelo pulled one back for Madrid, and Sociedad held out to hand Zinedine Zidane's shuffled line-up a first defeat in 22 matches, despite goals from Rodrygo Goes and Nacho and a red card for Andoni Gorosabel in a riotous finale.

Areola erred terribly to reward an enterprising start from Sociedad, pushing Isak's strike into Odegaard's path before allowing the midfielder's first-time follow-up to slide embarrassingly through his legs.

James Rodriguez's snapshot from the edge of the box drew a fine stop from Alex Remiro low to his right, with the Real Sociedad goalkeeper denying Vinicius Jr and Federico Valverde in quick succession before Sergio Ramos planted a 39th-minute header against the crossbar from an offside position.

Isak's wayward finishing had threatened to undermine Sociedad's fine work during the first half and he had a 49th-minute effort chalked off when a VAR review showed him to be offside on the end of Odegaard's throughball.

But the Sweden forward swivelled to superbly volley a chipped cross from Ander Barrenetxea – on as a half-time replacement for Adnan Januzaj – into the top left corner.

Isak then made further mockery of his earlier wastefulness by thundering an unstoppable shot high beyond Areola from Nacho's mishit clearance.

Unfortunately for the visitors, Remiro's earlier sureness deserted him as Marcelo fired through his grasp at the near post, handing Madrid a 59th-minute lifeline.

More slapdash defending sealed their fate, however, with Merino the unlikely and unmarked beneficiary when Isak turned provider.

Madrid almost dug themselves out of a hole of their own making, with Vinicius cutting back for Rodrygo to slam in after having a header of his own disallowed for offside.

Nacho's stoppage-time header and Gorosabel's second yellow card, for a foul on Vinicius, meant Sociedad stumbled over the line in a manner at odds with their earlier brilliance.

Next Athletic Club Eliminate Barcelona from Copa del Re
Read 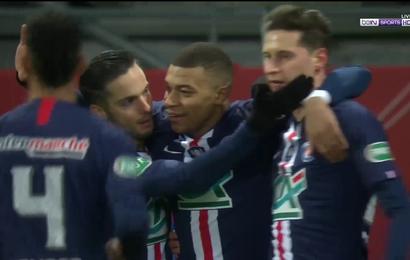