The Thundering Herd head into 2016 coming off a strong 10-3 regular season with a 16-10 victory over Connecticut in the 2015 New Orleans Bowl. Marshall enjoyed their fifth consecutive bowl victory.

Marshall has a lot to be excited about this upcoming season as Sophomore QB Chase Litton is returning after taking over the starting job in week three last year. Litton threw 23 touchdown passes leading all true freshman in FBS. He ended up leading the Thundering Herd to nine wins in 11 starts.

The Marshall QB will be throwing to a fellow underclassman in Sophomore TE Ryan Yurachek who led all FBS tight ends in touchdown receptions last season with 10.

While under head coach Doc Holliday, who enters his seventh season, Marshall has made a bowl appearance for the last three years and four of their last five seasons.

After winning the conference title in 2014 coach Holliday and the Thundering Herd look to regain supremacy in 2016 with another Conference USA championship. 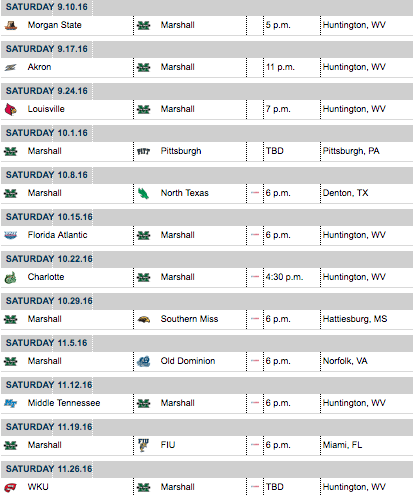