One of the most unpredictable tournaments in recent history continues as the Ramblers of Loyola continue on as they down the Kansas State Wildcats to make their first Final Four appearance since 1963. In their most dominating win of the tournament, senior guard Ben Richardson scored a career high 23 points in the 16 point win over nine seed K-State. The Ramblers matched the record for the lowest seeded team to ever reach the Final Four joining the 1986 LSU Tigers, 2006 George Mason Patriots, and the 2011 VCU Rams. Loyola will play the #3 Michigan Wolverines in the Final Foul.

The dream continues for Sister Jean and the Loyola Ramblers as they defeated #7 seed Nevada last night in a Sweet 16 opening thriller. Marques Townes led the way for Loyola with 18 points and 5 assist. The final three coming with just eight seconds left to put the Ramblers lead out of touch.

The Ramblers have now won their three tournament games by a combined four points. They advance to take on another surprise elite eight participant in Kansas State on Saturday.

Kansas State kept the upset trend going as they sent home #5 seed Kentucky in another thriller. Kentucky had been the hands down favorite to advance to the Final Four from the region, but Kansas State's forward Xavier Sneed had other ideas. The sophomore netted 22 points with 15 coming from behind the arc. Kentucky was not able to overcome a poor shooting game as they could never recover into dominant form once they fell behind 13-1 early.

The Wildcats hold off Kentucky and move on to the #Elite8#MarchMadness pic.twitter.com/UQXBB8eBVe

K-State advances to play tournament darling Loyola-Chicago on Saturday with a trip to the Final Four in San Antonio on the line.  If the Wildcats continue their winning ways, it will be their first final four appearance since 1964. 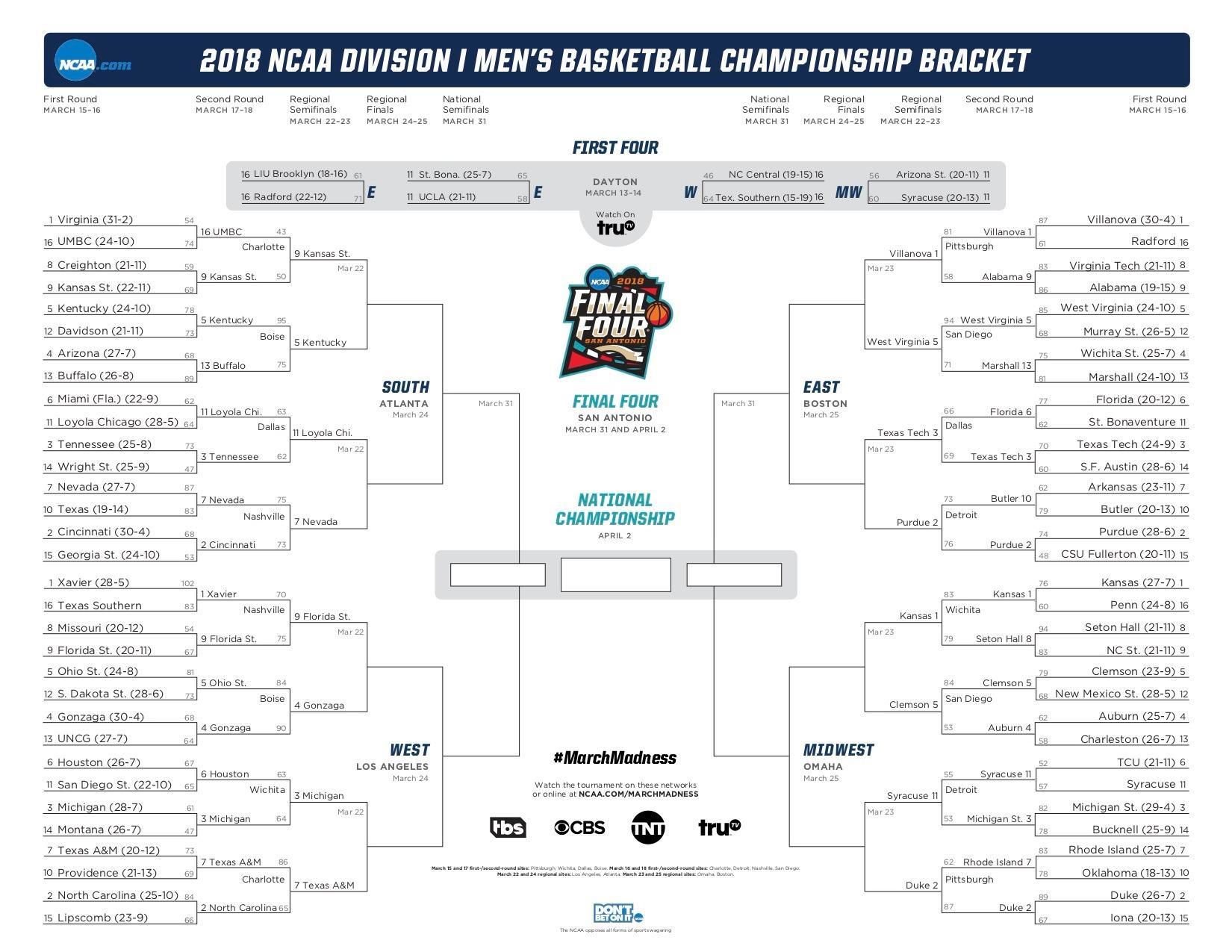 The opening weekend upset train has no stops as yet another one seed goes home early. Xavier found themselves in complete control over Florida State leading by 12 with 10:42 left. The Seminoles outscored the Musketeers 31-14 down the stretch including the final seven of the game. Florida State earns its first trip to the sweet 16 since 2011 and its second trip with head coach Leonard Hamilton.

Another No. 1️⃣ is done.

Initially, Syracuse was written off even after becoming the last team into the tournament by claiming the 68th and final spot before defeating  Arizona State. The Orangemen then upset TCU in the opening round to set up the match up with widely considered favorite Michigan State. The tested Jim Boeheim zone defense suffocated the Spartan offense and forced them into 3-point attempts all afternoon. The Spartans shot 8-37 from beyond the arc and were held to just 25.8% shooting overall. Tyus Battle led the Orangemen with 17 points and Oshae Brissett added 15. Syracuse will face another tournament favorite in the Duke Blue Devils in the next round. 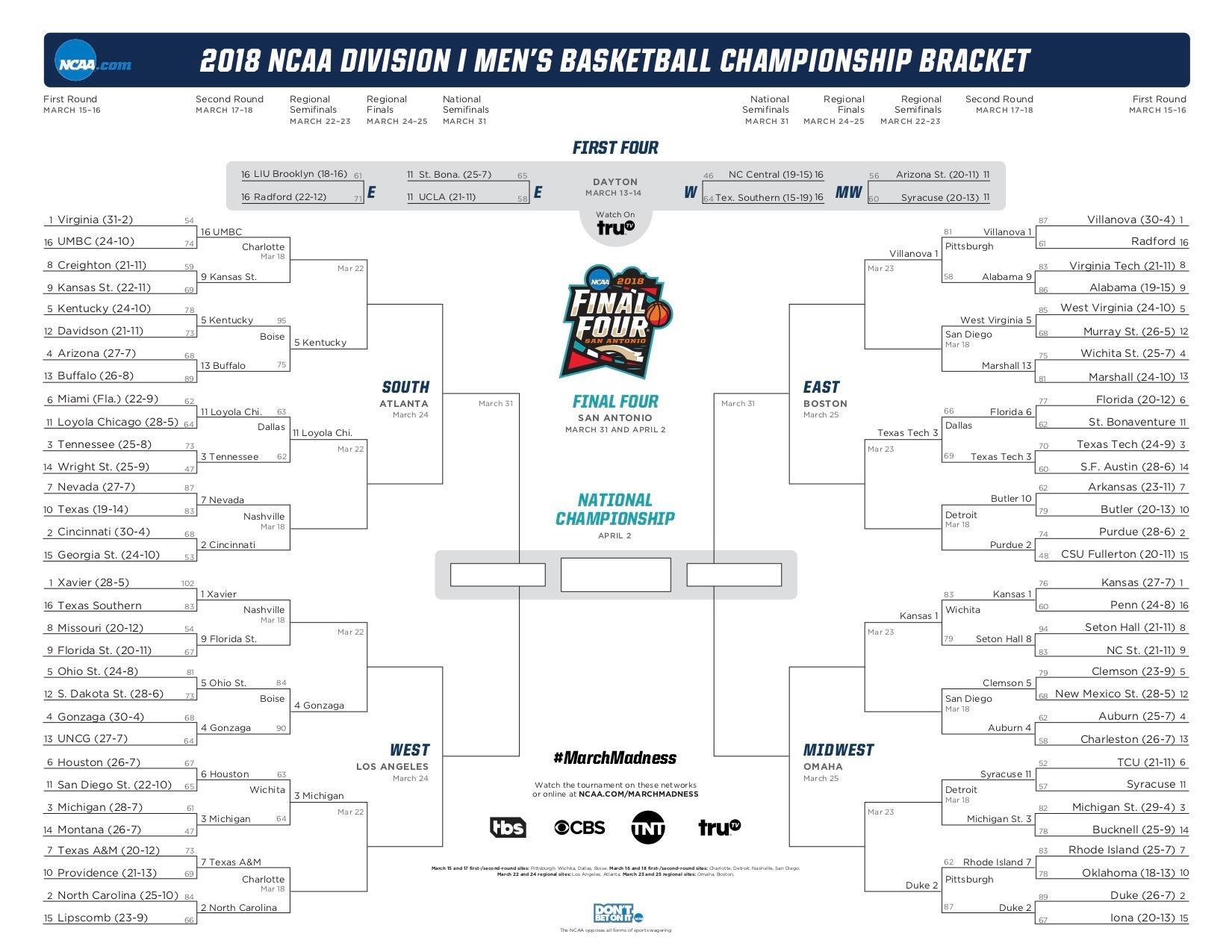 The Ramblers of Chicago will keep on rambling for at least one more round as Loyola shocked three seed Tennessee with another late winner. Just two days after Donte Ingram's 3-pointer to eliminate the Miami Hurricanes, Clayton Custer's jumper rattled in to secure the sweet 16 birth for Loyola. It's the Ramblers first trip to the sweet 16 since 1985 which is also the last time Loyola made the NCAA tournament.

Just in case the tournament hadn't delivered enough drama for you, another instant classic unfolded between Houston and Michigan late on Saturday.  In the end, 23 points and 10 rebounds from Houston's senior guard Rob Gray was not enough as freshman guard Jordan Poole pulled up to sink the game winning 3-pointer as the buzzer sounded. It is Michigan's 11th straight win and secures them their fourth trip to the sweet 16 in the last six years.

MICHIGAN WINS IT AT THE BUZZER!!!! 🚨🚨🚨#MarchMadness pic.twitter.com/COR9MEjX59 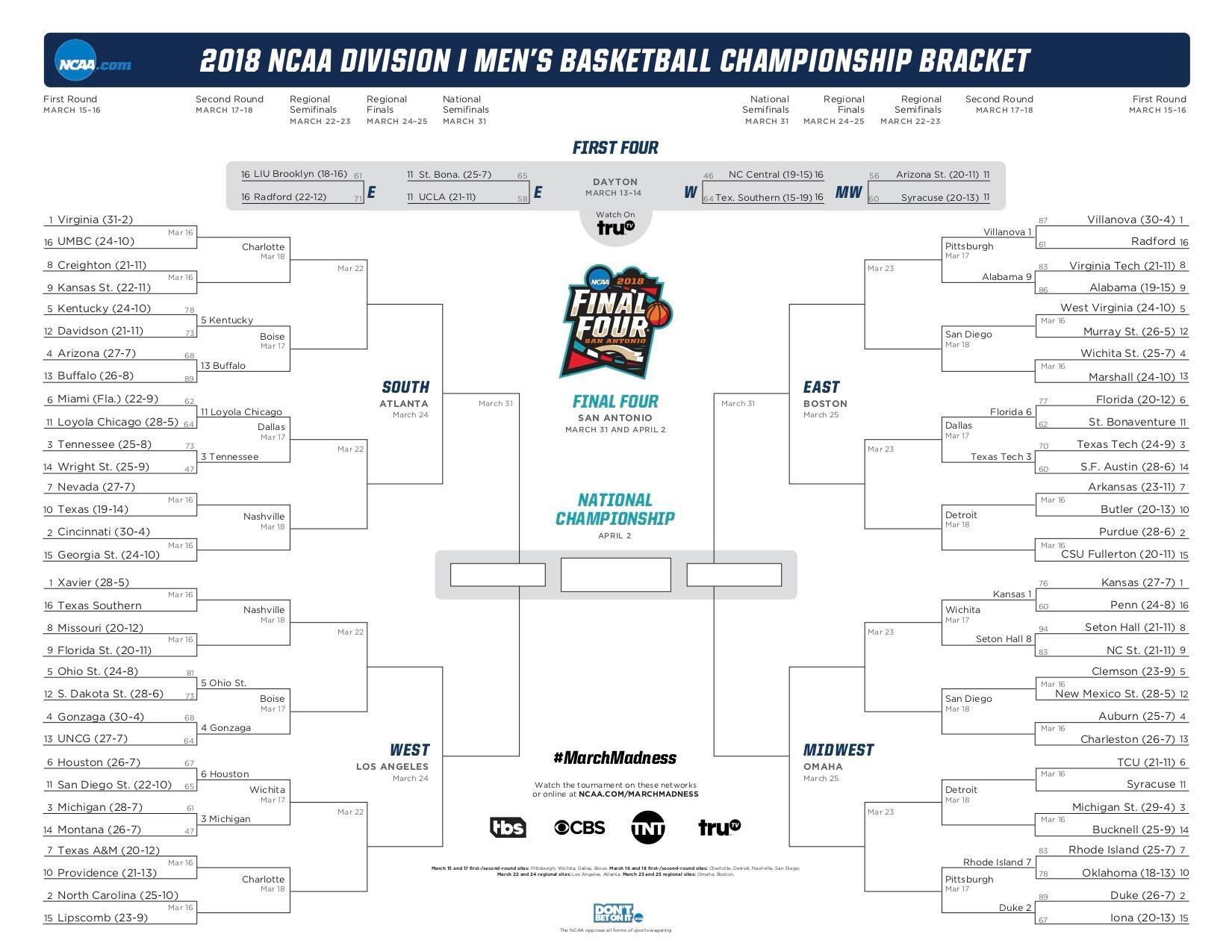 A number one seed had never lost to a 16th seed in NCAA tournament history until Friday night. The University of Maryland - Baltimore County Retrievers pulled off the biggest upset in tournament history as they dismissed the number one seeded Cavaliers with a dominating performance outscoring the current ACC champions by 20 in the second half. The historic loss is only the third loss of the year for the Cavaliers who finished the regular season with 30 wins. It ends a season that saw them go 20-1 in ACC play and enter the tournament as the number one overall seed. Number one seeds were 135 - 0 against 16 seeds prior to the UMBC miracle.

UMBC becomes the first 16 seed to upset to beat a No. 1 seed!#MarchMadness pic.twitter.com/iLdbVhNC0A

The Retrievers advance to play the ninth seeded Kansas State Wildcats in the round of 32.

Another big upset in the first round of the tournament sees Conference USA’s Marshall down four seed Wichita State on the back of senior guard Jon Elmore. Elmore scored 27 points and added four assists in the win.

The win is the first in NCAA tournament history for the Thunder Herd. 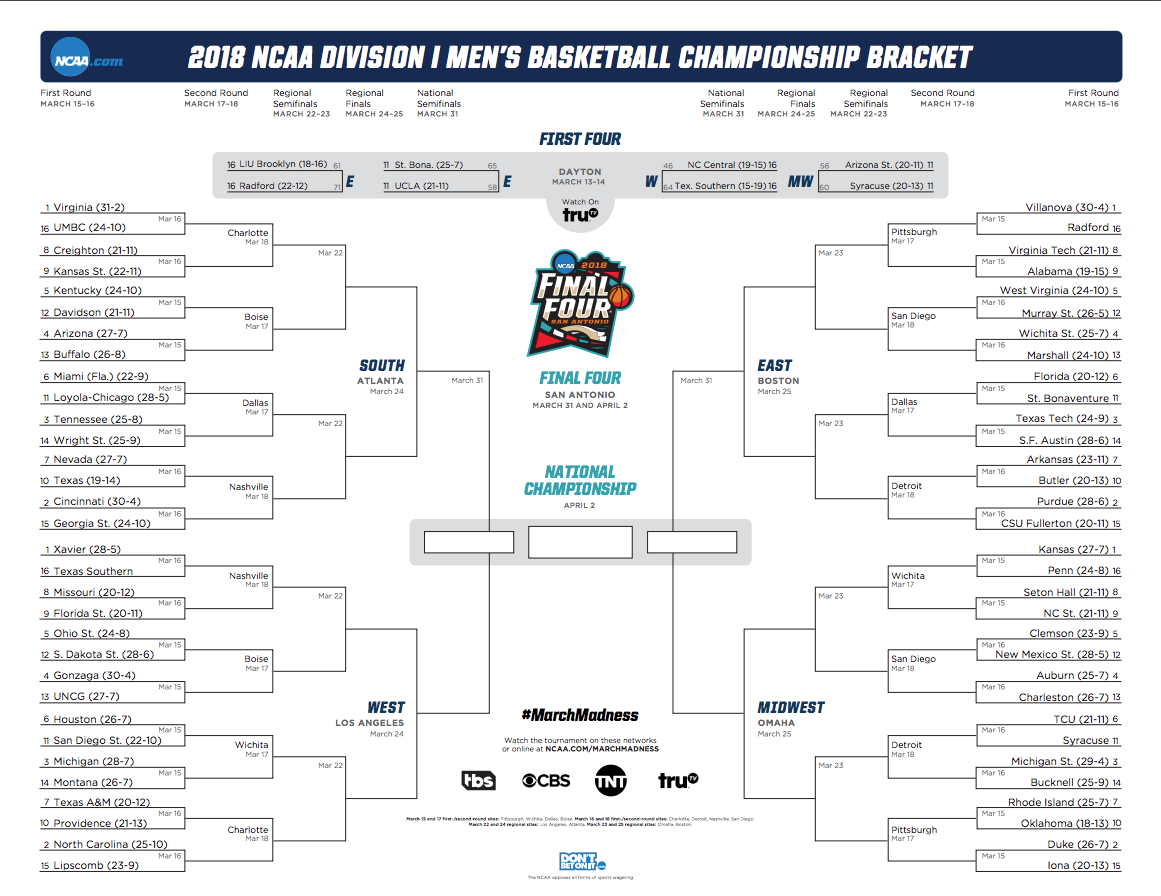 Trae Young's 28 points was not enough for Oklahoma to push past the University of Rhode Island Rams as the Sooners go down in the first round of the NCAA Tournament. Young also added five rebounds and seven assists to his 28 points but only one other Sooner found themselves with double-digit scoring in the losing effort.

The Rams shared the scoring duties. Four players scored in double digits in the overtime victory with senior guard E.C. Williams leading the way with 16. Three of the 16 on this dagger with 31 seconds left in overtime:

The Rams hold on to defeat the Sooners in OT, 83-78. #MarchMadness pic.twitter.com/9BebzRWZyN

The Rams move on to play second seed Duke in the round of 32 after the Blue Devils made short work of Iona 89-67.

Wright State couldn't get right as they were easily dismissed by the Volunteers in a rout. Tennessee sophomore guard Lamonte Turner led all scorers with 19.  Tennessee next takes on Loyola who upset the Miami Hurricanes 64-62 with this last second Donte Ingram 3-pointer:

❄️ IN HIS VEINS! #MarchMadness pic.twitter.com/Lyyx3ZY9NV

UTSA at WKU: The Battle for Second Place

March Madness: And Then There Were Four