Borussia Dortmund beat a struggling Stuttgart side 3-1 but Niko Kovac's team collected their 12th win in 13 league games to ensure they became the new league leaders on goal difference.

Bayern have never lost at home to Wolfsburg in the Bundesliga and first-half goals from Serge Gnabry - who signed a new contract this week - and Lewandowski set up a comfortable victory at the Allianz Arena on Saturday.

Three points each at the top, but we have new leaders 👊 pic.twitter.com/LVU6DlrxZh

After the break James Rodriguez, Thomas Muller and Joshua Kimmich added to the scoreline, with Lewandowski scoring his second, and Bayern got the perfect boost ahead of a Champions League second leg against Liverpool by moving above BVB despite their win.

Lewandowski hit five goals in nine minutes off the bench against Wolfsburg in the 2015-16 season but he wasted an early chance by failing to control a lofted Muller pass.

Yannick Gerhardt headed Maximilian Arnold's corner over the crossbar, then Bayern took the lead in the 34th minute.

Gnabry scores his 7th goal of the season and puts the home side on 🔝 pic.twitter.com/mVWMnAsAhf

Kimmich's stepovers left Arnold dazzled and Muller pulled the ball back for Gnabry to nudge in from close range, the winger then creating a second goal within three minutes.

A throughball from James found Gnabry and he unselfishly squared for Lewandowski to tap in and pass veteran former Bayern forward Claudio Pizarro on the list of foreign goalscorers.

James scored the third himself in the 52nd minute, beating Koen Casteels with a placed 20-yard finish, the goalkeeper later making a fine save to tip over Muller's drive.

James Rodríguez makes it 3-0 for Bayern!

He puts an end to his goal drought and scores his 4th of the season 💪 pic.twitter.com/8DvpOLDL6X

But the Bayern forward would not be denied again in the 76th minute, slotting home Franck Ribery's pass to end a week that saw him dropped from the Germany squad on a high.

Bayern are running away with it now 🔥 pic.twitter.com/pwYIBa0Bjv

And although Dortmund got back in front against Stuttgart, Kimmich and Lewandowski added late headers from Ribery centres to boost Bayern's more impressive goal difference further.

What does it mean? Pivotal twist in title race

Bayern could not be doing more to put pressure on Dortmund, who had been top since their sixth game of the season. It might yet go right down to the wire but with Bayern now leading the table, few would bet against the champions winning what would be their seventh title in a row.

Lewandowski's record-breaking exploits take the headlines but a goal and an assist in the space of three first-half minutes saw Gnabry play a huge part in setting up Bayern's latest win.

The winger has now scored seven Bundesliga goals this season - also hitting a double in the DFB-Pokal last month - and it is easy to see why Bayern wanted to secure his long-term future.

It was telling Gnabry was rested and taken off by Kovac after the third goal - he is now key - although substitute Ribery created three goals after coming off the bench to give the Bayern boss a decision to make against Liverpool.

Wolfsburg head coach Bruno Labbadia has now lost his last 15 competitive matches against Bayern, extending his own unwanted Bundesliga record against one of the clubs he represented as a player.

Muller and Kimmich are suspended for Bayern's last-16 second leg at home to Liverpool in the Champions League on Wednesday. Kovac's men continue their title charge when Mainz visit the Allianz Arena four days later. Next for Wolfsburg is Fortuna Dusseldorf at home on Saturday.

Next Alcacer And Pulisic Spare Dortmund In 3-1 Stuttgar
Read 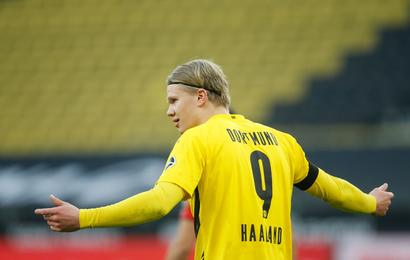