Olympic legend Usain Bolt raced competitively in his native Jamaica for the final time, picking up 100 metres victory at the Racers Grand Prix in Kingston.

The event was dubbed 'Salute to a Legend' as eight-time Olympic gold medallist and world-record holder Bolt bade farewell to his compatriots on the track.

Naturally, Bolt won - and in typical style too, bursting clear in the race's final phase - crossing the line in 10.03 seconds, as fireworks greeted the sprinters at the finish.

Jamaica saying a heartfelt thank you to Usain Bolt. His last race and a very special evening! pic.twitter.com/7YPVYnUrl0

The 30-year-old will retire after this year's World Championships, looking to swell his collection of 11 gold medals.

Fellow athletes David Rudisha and Mo Farah were there to celebrate with Bolt - Farah won the 3000m event - and Bolt was in a reflective mood after his victory, which follows the death of his close friend, former Team GB sprinter Germaine Mason.

He is quoted by the Jamaica Gleaner: "After my friend's death it was really hard for me, I have never been through something like this.

We are here in #Jamaica for this memorable farewell for the legendary @usainbolt last race in his home soil. pic.twitter.com/lEeZz8UbaE

"I had to take some time but I knew what I had to do and I knew Germaine would want me to do this. This was special.

"There are no words, from World Juniors the support that I have been getting from Jamaica has been remarkable.

"I could not have done this without my parents, my friends, my best friend NJ, I want to thank Jamaica, I never expected this.

"It's big to see everybody turn out, it shows that they appreciated what I did and it was a honour for me." 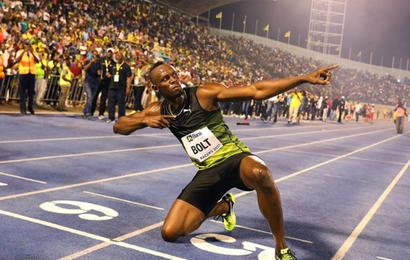