Sadio Mane fired Senegal through to the Africa Cup of Nations quarter-finals as they saw off Uganda 1-0 in Cairo.

The Liverpool striker is targeting more silverware after helping his club side land Champions League glory, and Mane's first-half strike carried his nation past awkward opposition.

Mane missed a second-half penalty after he had been clattered, but his earlier clinical finish proved enough.

Senegal, for whom this was an eighth win in their last nine games, will next face Benin who earned a shock 4-1 penalties win against Morocco following a 1-1 draw earlier on Friday.

In a sign of things to come, Uganda goalkeeper Denis Onyango bolted out of his penalty area and knocked Ismaila Sarr to the ground in the early stages, with Senegal urging the referee to show a red card. He opted for yellow.

Uganda, runners-up in 1978, fell behind in the 15th minute when Mane charged into the penalty area and beat Onyango with a low left-footed shot into the bottom-right corner.

Farouk Miya looked to carry some threat for Uganda, but they lacked a cutting edge and should have been 2-0 down by the hour mark.

Onyango charged off his line and mistimed a lunging tackle in his penalty area, sending Mane sprawling. It looked a foul worthy of a second yellow card, but the goalkeeper instead appeared to be given a final warning.

Mane went for the right corner again, but Onyango guessed correctly and pushed the ball away.

The miss almost proved costly, with Uganda going close to equalising in spectacular fashion when Allan Kateregga drove a 30-yard free-kick towards goal.

The ball was struck firmly and heading inside the right post, but Alfred Gomis threw himself across goal to make a fine, priceless save.

Brest Battle Back For Draw With Nice 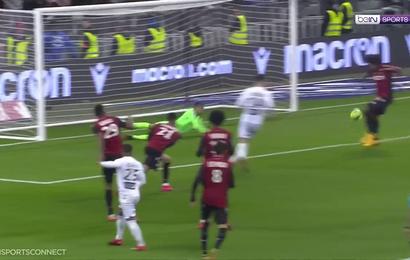